If someone makes a 1914 Model T in their garage today, it is a replica, not the real thing. If the Ford Motor Company tasks two men with building a half dozen cars that are produced with the same tolerances as the original, then they are not only authentic, but are arguably the resumption of production that ended more than 70 years ago.
#Ford 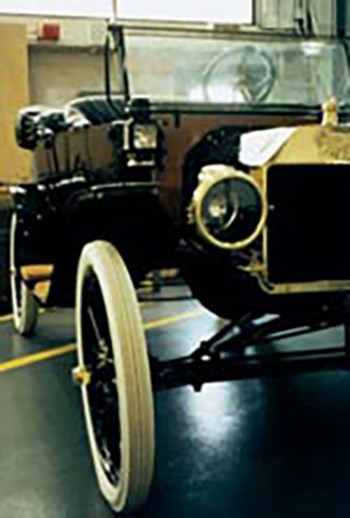 Oftentimes, when we see yet-to-be-publicly introduced cars, we are under an “embargo,” which means that we are to keep what we know of the way the car looks, is engineered, built, and rides to ourselves until a specific date. (In case you’re wondering, that’s how the buff books all seem to have the same car on the cover at the same time.)

One request of an embargo-like nature that we’d never had before came from an individual at Ford who is involved in publicizing the various activities associated with the 2003 centennial of the vehicle manufacturer: “Don’t tell anyone where this was done.”

At the risk of getting into some sort of space/time conundrum, let me observe that I was witness to the manufacture of brand-new cars at this undisclosable location, cars the likes of which I had only seen in museums and in books, the kind of cars that you think are really cool when you are a kid—or are among the hundreds of thousands of people who keep their enthusiasm alive when they’re old enough to afford such things.

Simply: I watched the partial manufacture of brand-new 1914 Model Ts.

Here’s the tricky part: Guy Zaninovich—whose business card reads “Fine Automobiles of the Edwardian, Vintage and Classic periods—bought, sold, located and enthusiastically discussed”—one of the two men tasked by the corporation to initiate the manufacture of the vehicles, insisted that the cars are not replicas or rebuilds. Rather, this was the resumption of production of the vehicle by the Ford Motor Co. after a hiatus that began on May 31, 1927. Sure, they sourced parts from places like Lang’s Old Car Parts (Winchendon, MA), from which plenty of Model T enthusiasts acquire parts (according to Zaninovich, of the more than 15 million Model Ts built between 1908 and ’27, some 500,000 to 600,000 still exist in some form or another and from 200,000 to 300,000 are drivable, which means that there are a lot of enthusiasts out there; he notes, “There is a big cottage industry in the antique aftermarket”). And the bodies for the new Ts were made in Sweden (wood frame with a sheet metal overlay); they weren’t bodies by Fisher as the originals had been. Still, as Zaninovich pointed out, “These”—and he’s referring to the half-dozen vehicles that they’ve built—“are built at and by Ford.”

When asked to identify the difference between a car that he and Bill Leland have produced and one that rolled off of the assembly line at the Rouge, he answers, simply, “The serial numbers.”

According to Zaninovich, they were respectably productive back in the day. He said that in 1913, Ford produced 60,000 Model Ts; it took about 600 minutes to build a car. With the moving assembly line in 1914, the improvement was significant: 400,000 units, with a 73-minute build time. Things were exceedingly impressive by 1921: 2.5 million cars; a 53-second build.

There is something slightly ironic about what it says on Bill Leland’s card: “Project Manager, Powertrain Operations, Advanced Manufacturing, Pre-Program Engineering.” Advanced Manufacturing? His colleagues were working on programs for vehicles that are at least 90 years more advanced than the project that he and Zaninovich started in 1999. Leland went from working with early production teams to make sure that designs of new products were as “manufacturing friendly as possible” to figuring out how to manufacture the 1914 Model T.

There were part drawings available in the Henry Ford Museum collection (where four of the new Model Ts are now located) and the aftermarket parts. They had a well-restored car to work with. But Leland said that there was a particularly problematic issue that had to be resolved with late 20th-century technology: the engine block. “The prints for the block are not specific,” Leland said. Sure, there were all of the outside dimensions. But they couldn’t determine what the cavities in the casting, the water passages, were. And they didn’t want to cut a block apart to figure it out. So they took a block to Hill Air Force Base (Ogden, UT), for a CAT scan. That digital information was then used to create a 3D model, which was used for creating the molds for casting.

(About the four-cylinder engine, Leland observed that there isn’t a lot of difference between those built new and in 1914, except that Henry Ford depended on a siphoning action for fluid movement. “The great part about the design of this engine,” Leland said, “is its simplicity.”)

There is even a component on the original 1914 vehicle that was moderately vexing to circa 2001 stampers at Ford: an L-shaped stamping, the crankcase, which is located under the engine and transmission. When the contemporary stampers tried to make the piece with two draw dies, the part ripped. Leland did research and discovered that the original parts were made with seven draw dies. Between each step the part was annealed; stresses were relieved so there was no tearing of the material. In order to produce the tooling for the component, the contemporary engineers used a spray-form process to build up the dies. After all, the volumes for the 2001/1914 vehicles didn’t justify—or require—hard tools. 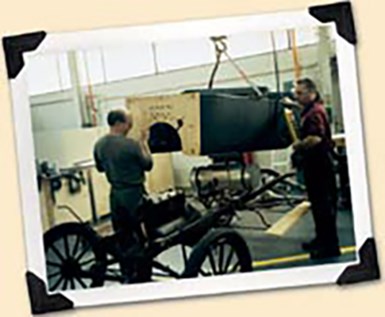 Bill Leland (left) and Guy Zaninovich (right) installing the body of a Model T on the chassis. Yes, that’s wood.

It took Leland and Zaninovich 11 months of work to build the first in the new series. Interestingly, that is the same amount of time that Henry Ford required to build the first Model T in 1908. The two men got so proficient that they ramped up production so they could build a vehicle in two months. A far cry from the speed attained at the Ford Rouge Plant.

Oh—about that request for silence vis-à-vis where the cars were built. Apparently, there was concern that Model T fans would have shown up in great numbers to witness the production of a series of brand-new vintage automobiles.