The Absurdity of Section 232

As everyone who works in the auto industry knows, there is a comprehensive global network that is instrumental to the way it now operates. No one country produces everything. Which means that trade should be as frictionless as possible, which is not always the case, but which should be promulgated.

What’s more, there is an understanding that putting up a factory for vehicle assembly or parts manufacturing isn’t like putting up a pop-up store on the streets of Manhattan. Factories are (1) huge investments and (2) not the sort of thing that get built overnight.

The U.S. had applied tariffs on the import of steel and aluminum from Mexico and Canada that have been lifted. When they were applied it was under something called “Section 232.”

In the fall there is a good chance that Section 232 is going to be pulled out again to apply tariffs—as much as 25%--on vehicles and parts produced in the European Union or Japan.

So in case you’re wondering about that, here’s the thing:

The authority goes back 57 years to a section of a trade act that Congress put into effect, a section dealing with national security.

In 1962 the U.S. Congress passed the “Trade Expansion Act of 1962.” According to the text of the law, the purposes of the act are “through trade agreements affording mutual trade benefits” three-fold:

(1) To stimulate the economic growth of the United States and maintain and enlarge foreign markets for the products of United States Agriculture, industry, mining, and commerce;

(2) To strengthen economic relations with foreign countries through the development of open and nondiscriminatory trading in the free world; and

Based on the last one alone you get a sense of how things were in 1962.

But note how this was seemingly all about, well, “trade expansion,” and “open and nondiscriminatory trading.”

Within the Trade Expansion Act there is Section 232, which is predicated on ensuring national security through trade enforcement.

Drilling down deeper, there’s Section 705.4 titled “Criteria for determining the effect of imports on the national security.” It includes a number of factors that need to be taken into account by the Secretary of Commerce, including “Domestic production needed for projected national defense requirements” and “The capacity of domestic industries to meet projected national defense requirements.” Presumably if the U.S. military was importing, say, cruise missiles and as a result domestic cruise missile manufacturers went out of business, that would be a problem.

But a Lexus LS? 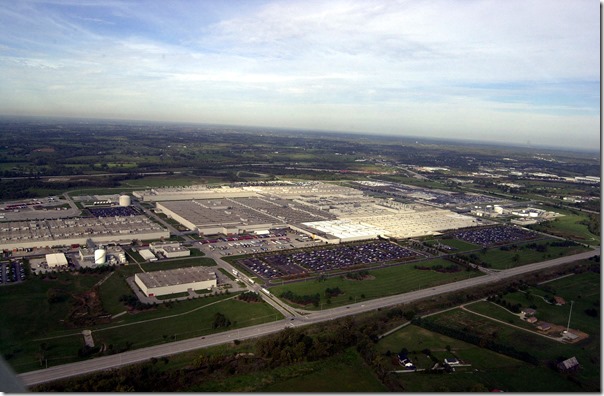 This is Toyota’s largest vehicle manufacturing plant in the world. It happens to be located in Kentucky.

Section 705.4 goes on to say that it not just about national defense requirements but also “the strength of our national economy.” A strong economy is necessary to have the wherewithal to produce the items needed for national defense. A concern that is called out in this regard is: “The displacement of any domestic products causing substantial unemployment, decrease in the revenues of government, loss of investment or specialized skills and productive capacity, or other serious effects.”

Is the BMW 7 Series causing a reduction in government revenues?

Winding back the clock to 1962 there was the Cuban Missile Crisis, when the Russians put ballistic missiles in Cuba. You’ve got to believe there was a whole lot of concern regarding not only “Communist economic penetration” but the transformation of Miami Beach into glass. Which undoubtedly contributed to the legislation.

There is a saying that “generals always prepare for the last war.” The war prior to 1962 was the one on the Korean peninsula. The distance between Washington, DC, and Seoul is about 6,900 miles.

Having a war that far away meant that were it needed, as was the case during World War II, the industrial infrastructure of the auto industry could be, with time, transformed into armament factories. Presumably that goes to part of the thinking in Section 705.4.

Nowadays, of course, should there be a major conflagration, given that an ICBM can travel at 4.04 miles per second and the distance between Washington, DC, and Moscow is 4,857 miles, there is about 20 minutes, which certainly isn’t enough to transform a factory into a tank plant.

Section 232 of the Trade Expansion Act of 1962 is being brought out of late, not, evidently, “To strengthen economic relations with foreign countries through the development of open and nondiscriminatory trading in the free world” (the aluminum and steel tariffs that were recently lifted from steel and aluminum imports from Canada and Mexico fell under 232) but as a means by which there is protectionism.

For whatever reason, the U.S. Commerce Department has determined that foreign vehicles as being some sort of threat. Which is causing consternation not only at OEMs but at dealerships and affiliated organizations.

What is interesting to note is that the Japan Automobile Manufacturers Association (JAMA) has come out with some rather interesting statistics including that its member companies have 24 manufacturing plants in the U.S. (in addition to 45 R&D and design facilities and 39 distribution centers). The cumulative investment in manufacturing is approximately $51-billion.

Wrapping in direct, supplier, dealer, and spin-off employees, according to Dr. Thomas Prusa of Rutgers University, who did a JAMA-sponsored study of the subject, there are 1,615,460 jobs supported by the JAMA companies (e.g., Toyota, Honda, Nissan).

Let’s say that there was some sort of long, drawn-out ground war and tanks and other armaments.

In addition to the part that protects oneself from self-incrimination, the Fifth Amendment to the U.S. Constitution has something called the “just compensation clause,” which essentially says that the government can seize private property for public use as long as there’s compensation. So if it deemed it necessary, those 24 manufacturing plants—as well as those of Hyundai and Kia, BMW and Mercedes—could be taken over by the government and converted to war production.

But does anyone—inside of Washington or out—really think that if there were there to be such a war the owners of those factories wouldn’t be more than willing to do whatever it took to win said war?

If only politicians understood the complexities of manufacturing or actually boned up on their Adam Smith.