The Auto Industry Is a Tough Business: Just Ask Byton

The company that seemed to be on a roll with its EV has put on the (regenerative?) brakes for six months
#Nikola #Tesla #Byton

One of the things that is true about vehicles powered by electricity versus those with an internal combustion engine under their hoods is that the electric powertrain is significantly less complex. Although when you open the hood of a vehicle today you see little other than a styled plastic engine cover. Beneath that are valves, springs, pumps, bearings, rods, connectors, sensors, gears, arms, wires, pistons. . . . Lots of stuff. 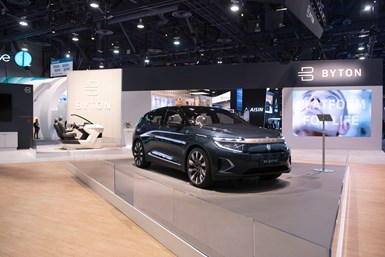 Want to know why the startups in this industry are EV startups? Those thousands of parts that go into a powertrain (we can’t forget the transmission, which is one of the most complicated components in a vehicle, one that has a multitude of precision-machined parts, many of which operate at high speeds under pressure).

The setup for an EV is a whole lot simpler physically, though algorithmically it is challenging.

Another factor is that traditional OEMs simply aren’t financially sexy.

The absurd valuations like Tesla and Nikola bear this out.

Why put your money in something that promises little return at most when you can go where the returns seem to go nowhere but up.

Here’s the thing, though.

EVs may be simpler to make but the auto industry is a complicated, demanding, unforgiving and otherwise difficult one.

In the current issue of Automotive Design & Production there is a story about Byton, a China-based EV startup that seems to have been on a roll in terms of people, product development and even a giant factory.

One of its USPs is a 48-inch screen going from A-pillar to A-pillar on its M-Byte SUV.

Byton even built a full-fledged factory.

There were plans to roll out the vehicle in the home market and then to make its way to Europe and the U.S.

But according to a report in The Detroit Bureau, Byton is “suspending operations for the next six months” starting July 1.

The story quotes Byton U.S.-based spokesperson Dave Buchko: “The board of directors and top management are looking to find a way to move the company forward.”

What would you say in a similar situation?

There are a multitude of factors that could have played into this, ranging from COVID-19 having an effect on Byton personnel throughout the world to the simple fact that sales are significantly down in China and everywhere else, so gaining traction in a diminished market might require more effort than the return that could be realized.

There are other neophyte companies like Nio and Faraday Future that are trying to make it with EV products. On September 9 Lucid Motors is going to reveal its Lucid Air luxury EV sedan and the company is building a factory in Casa Grande, Arizona, to produce it.

With traditional OEMs finding it ever more difficult to make returns, it is going to be even more trying for the newcomers.

This is not to say that some of them won’t be successful because odds are Tesla isn’t going to be the only company to offer vehicles not powered by internal combustion engines that will make its mark on the market.

But it is to say that even those that seem like a sure thing are fundamentally uncertain.