Although window glass and electronics might not be immediately associated with one another, Larry J. Costa of Costa Technologies (Mishawaka, IN) observes that the association of one to the other—especially with regard to the backlight (i.e., the rear window)—is becoming increasingly tight.
#PolyOne 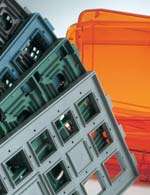 These plastics are actually capable of conducting electricity.

Although window glass and electronics might not be immediately associated with one another, Larry J. Costa of Costa Technologies (Mishawaka, IN) observes that the association of one to the other—especially with regard to the backlight (i.e., the rear window)—is becoming increasingly tight.

To be sure, auto glass is a regulated material. There are Federal Vehicle Safety Standards associated with safety-tempered glass. Costa has petitioned the National Highway Traffic Safety Administration (NHTSA) because he is concerned with the consequences that can occur when there are electrical terminals affixed to safety glass. As he puts it in his letter to NHTSA, "The heating and cooling of the soldering process used for attaching the electrical terminals to the glazing's conductors can cause localized annealing of the safety tempered glass, causing the individual glass fragments to be larger than the ANS Z26 #5.7.4 weight limit of 4.25g. (0.15 oz)."

Apparently, the testing of glass temper is done prior to attaching anything to the glass.

As Costa explains it, one of the problems associated with attaching these terminals to the glass is that there is the possibility that the safety tempering process can be negated by localized annealing which can occur when the glass is heated via common methods such as resistance soldering or using an acetylene gas flame. In the first instance, he says, electrodes (four are common in automated systems; two for manual) are used to pass current through the terminal, which causes heating up to 900° F or more. As a result of both the heating and cooling (which can require several seconds), the small fragments that are supposed to be produced when the glass breaks can be significantly larger, and consequently more dangerous.

His company has developed what he claims is an effective alternative. It's called "intermittent micro flame soldering," and it employs a small gas flame that heats a localized area so that there is minimal collateral heating of the surrounding area. This is further enhanced by heat sink cooling that limits the temperature increase of the surrounding glass to 25° F—even though the gas flame is operating at approximately 5,600° F. That's right: 5,600° F. What about 900° F being too high? Costa says that the difference is found in the quick on-off of the flame and the fast dissipation of the heat by the heat sink. As a result, Costa says, the tempering is not affected by localized annealing, so the large-fragment problem is eliminated.

Costa says that his method employs a combination of hydrogen and oxygen. He explains that this gas had been used back in the earlier part of the 20th century, but there were a few problems associated with it, such as (1) the lack of bottled gas, which led to the use of an expensive, maintenance-demanding electrolysis gas generator and (2) a tendency for the soldering units to explode when the flame was extinguished. The bottled gas problem is, of course, solved. As for the other, they've crated a positive-flow purge valve that permits turning the gas on and off without the problem. What's more, during the purge portion, there is an inert gas or compressed air sent through, which contributes to cooling.

The system, Costa says, is comparatively compact: 6-ft. long rather than the 100-ft. of his competitor's equipment. What's more, he says that the system permits the feeding in of solder wire, so pre-clad terminals do not need to be used. Another cost savings is based on fast changeover: rather than using robots and bowl-feeders, he says they've been able to use a terminal carrier design that permits the terminals to be housed on reels that can be quickly changed in a matter of minutes.

With the proliferation of electronic devices within vehicles, the issues of static build-up, electrostatic discharge (ESD), and electromagnetic or radio frequency interference (EMI/RFI) are becoming more vexing for product engineers. One solution is the implementation of electrically conductive engineered materials—a.k.a., thermoplastics.

One supplier of materials of this type is PolyOne Corp. (Cleveland, OH), which offers a line of what it calls Stat-Tech, which is available in more than 20 base resins, ranging from rigid to elastomeric. The rigid types include ABS, LCP, PBT, PEEK, PC, and others. The elastomerics include COPA, TPO, TPU, and TPVs. The required characteristics of the material are said to be tailored to meet applications requirements.

Among the cited benefits of these materials are that because they are moldable, there can be light-weight part designs created; conventional thermoplastic molding and forming equipment can be used; the conductive materials are present throughout the part and therefore won't wear away as can happen if, say, antistatic coatings are used.