The Importance of EV Infrastructure

One of the reasons why Tesla has been doing so comparatively well in the electric vehicle space has nothing to do with its cars, per se.
#Tesla #oem #Ford

One of the reasons why Tesla has been doing so comparatively well in the electric vehicle space has nothing to do with its cars, per se.

Rather, it has to with the fact that Elon Musk cleverly discerned that it would be to the company’s advantage to build out a network of charging stations for its vehicles. After all, while the number of gas stations in the U.S. (in excess of 120,000) makes it such that unless you’re in the proverbial middle of nowhere you can always get a fill-up and a supply of salty snacks, EV rechargers are rare. So by creating the “Supercharger” network (in North America there are more than 1,000 stations with some 7,200 480-volt chargers), Musk has created another competitive advantage.

Ford, which presently has just one EV model available for consumers (the Focus Electric) but which has the C-MAX and Fusion with plug-in hybrid configurations, performed a study of the use of the 200 charging stations that it has at 50 of its facilities.

The research shows that some 60 percent of the employees who have electric vehicles say that the Ford workplace charging network influenced their decisions to get that type of vehicle. 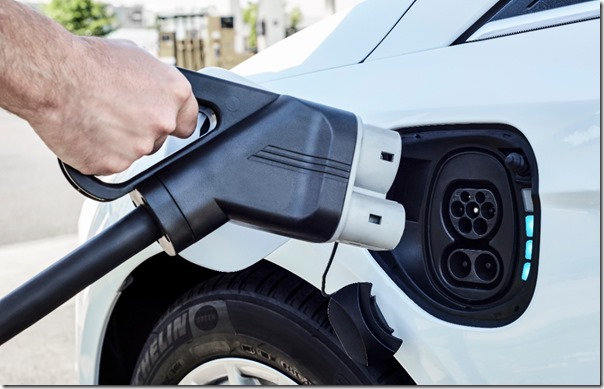 Noted Steve Henderson, Ford sustainability and vehicle environmental matters manager, “Work is the second most likely place people charge their electric vehicles. If we give people the ability to charge when they’re at work, we can significantly up the potential for mass market adoption of electrified vehicle technology.”

Since September 2014, Ford has calculated—using data from its MyFord Mobile smartphone app, charging network and employee surveys—that there have been more than 165,000 charges, which translates to some 2-million EV miles, and a reduction of carbon emissions on the order of 600,000 kg. What’s more, the results show that even though gas prices are low, the availability of workplace charging is positively influencing the adoption of EVs by its employees.

It should be noted that it is not all sweetness and light: Henderson, in a presentation to the 30th International Electric Vehicle Symposium and Exhibition in Stuttgart, Germany, said that employees who are at one site all day and who have to move their EV once it is fully charged are not particularly happy about that situation. (Presumably, someone who is in need of a charge is far less happy finding a fully charged vehicle plugged into a charger.)

Ford plans to increase its number of workplace chargers to 600 during the next two years.

Given that Ford has announced it will be adding 13 new electrified vehicles to its lineup during the next five years, chances are the 600 is only the beginning.

(Other companies are building out charging infrastructure, as well. Volkswagen, for example, as part of its penalties associated with the diesel debacle, actually established a subsidiary, Electrify America, which will spend $2-billion over the next 10 years for infrastructure and EV education. And there are private companies—like EVgo and ChargePoint—that are setting up stations, as well.)