One of the prevailing problems throughout industry is finding talent. Especially in the areas of electronics and software engineering. The competition between Detroit and Silicon Valley is a 21st-century version of the Jets and the Sharks without the choreography.

Chances are there isn’t a single engineering university in the U.S. that doesn’t have a SWAT team of auto industry recruiters ready to roll in at a moment’s notice.

Meanwhile, Jaguar Land Rover is taking a different approach to getting people. And the kind of people it is finding are probably those who would never even get a chance from those taking the traditional recruitment approach.

Consider Daniel Dunkley, who Jaguar Land Rover recently hired to work as a software engineer at its facility in Gaydon, Warwickshire.

He has been working as a controls engineer at a local quarry. 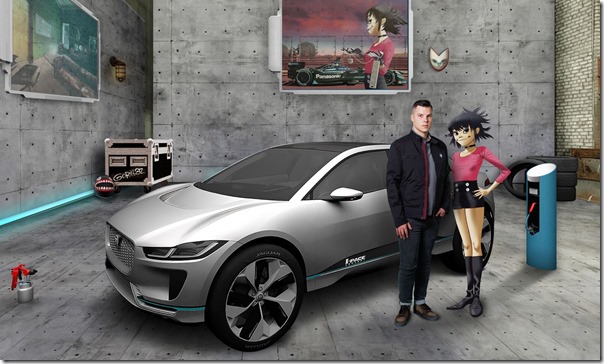 Dunkley and Noodle. “She” plays the guitar for Gorillaz.

He taught himself coding and software by playing computer games at home.

It gets even more non-traditional.

Jaguar Land Rover has partnered with a band, Gorillaz. Gorillaz is non-physical. Yes, it has music that has topped the charts around the world. But the band members are cartoons.

Last April Gorillaz launched an app on iTunes and Google Play. Included in the app is a Jaguar Land Rover code-breaking recruitment challenge.

Dunkley: “I read about the coding challenge set by Jaguar Land Rover and Gorillaz on BBC News and decided to have a go. We did the interview by Google Chat then I was invited to Gaydon to talk about my new job. It completely blew me away that I didn’t have to fill out any application forms. I was thrilled when they offered me a job! My dad drives a Land Rover Defender so I have always been a fan. I can’t believe I may now get to work on the next generation Defender!”

Alex Heslop, Head of Electrical Engineering, Jaguar Land Rover: “Daniel is exactly the kind of person we need. Technology companies like Jaguar Land Rover provide an exciting opportunity for the brightest and best. We want to attract top-notch talent in software, cyber systems, app development and graphics. We don’t do ordinary and that means hiring extraordinary people. Jaguar Land Rover makes some of the world’s most exciting cars and it needs brilliant people to create them.”

By the way: Jaguar Land Rover still accepts resumes but it recommends that those who are really interested ought to download the app as it could fast-track their way to a job.