Once, Kia was all about comparatively innocuous, thrifty cars. Then it began to put stunning designs on the road. Now it is going after luxury buyers.
#Hyundai #HP #Kia 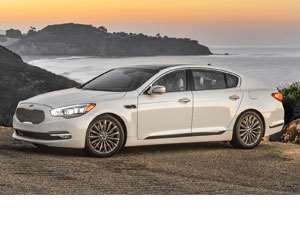 The Kia K900 is Kia’s endeavor to get into the luxury space. They think that there is a new breed of buyer who is more interested in value than a heritage badge, in getting things from LED lighting all around to a 420-hp V8 to advanced sensor technology at a more economical price than has traditionally been the case. 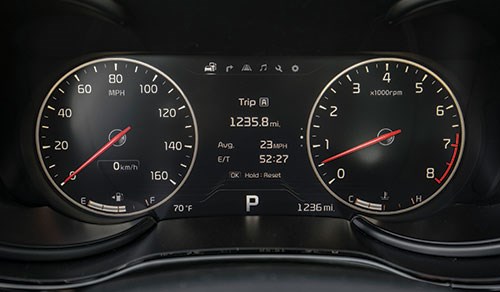 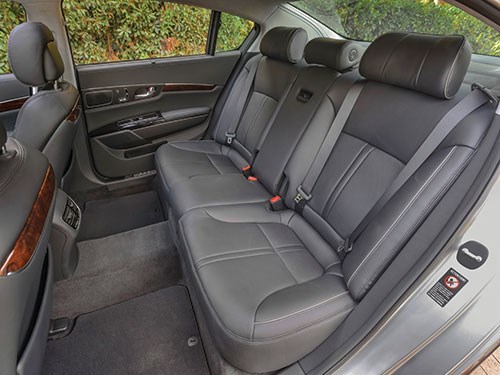 This is the back seat of the K900. Yes, that is leather. But note the extensive amount of leg room (38.2 in.) and the people in the front are not snugged up to the steering wheel or glove box.

So what do you do if you’ve got a brand that has been in the U.S. market for 20 years, during a considerable amount of time it was known for its highly economical vehicles? Admittedly, changes have been made. Improvements have become the order. The vehicles have still tended to be economical, providing customers with plenty of value, complemented by rising levels of quality.

So what do you do? Produce a luxury car. That’s right. A car that is designed and engineered specifically with, primarily, the German marques right in the cross hairs. Michael Sprague, executive vice president of Sales and Marketing, Kia Motors America: “We’ve been a challenger brand for 20 years. We see luxury brands moving into the mass-market space. If they’re going down in our space, why can’t we go up to theirs?”

Orth Hedrick, vice president of Product Planning, describes the full-size, rear-drive sedan as filling the “white space” between mid-lux cars including the BMW 5 Series, Audi A6, Mercedes E-Class, and Lexus GS and lux cars including the BMW 7 Series, Audi A8, Mercedes S-Class, and Lexus LS. It slots in the middle. Part of it is price. A fully loaded (“VIP Package”) V8 has an MSRP of $65,500. Part of it is functionality (420-hp V8 [the first in a Kia sedan]; an eight-speed automatic transmission developed in house; lane departure warning; adaptive cruise control) and amenities (LED headlamps [16 LED bulbs], turn signals, daytime running lights, fog lights, tail lights, and interior lights; Nappa leather and walnut or poplar trim).

The K900 is coming at the competition, coming hard with a comprehensive package.

Sprague admits that when most people think “luxury” they do not think “Kia.” They understand that. But he insists, “We’re offering a new definition of luxury. Not ‘tradition’ and ‘heritage’ but one based on design, technology and quality. We think that we can tick all of those boxes.”

Design. The concept for the K900 was penned by Tom Kearns and his design team at the KMA studio in Irvine, California, then sent to Korea for completion. As a rear-drive car, it has the stately proportions that can be achieved by the location of the wheels, and between the wheels is 119.9 in. The front of the car has a new interpretation of Kia’s now-signature grille; there is a dark chrome mesh inner surrounded by a bright chrome halo. There is a sharp crease running from the (faux) air vent on the front quarter through the front door and about halfway into the rear door. Along the bottom sill there is a bright chrome trim piece; another section of the material is placed on the bottom of the rear quarter. Around back there is a horizontal chrome element that connects the tail lights; cleverly, the white backup lights are integrated into the chrome. The hood is long, and the roofline sweeps to a fast backlight and comparatively truncated decklid with an integrated spoiler; the appearance is more 2.5-box than 3-box, though that might make one think that this would mean there is compromise vis-à-vis rear passenger space, which is anything but the case.

About the interior, Hedrick says, “It is not a stuffy, old man’s car. It is not overwrought with design details.” That said, it has a clean, conventional appearance, not an avant-garde minimalist design. The VIP package brings with it a large TFT display for the gauges. Central to the instrument panel is a 12.3-in. color screen. The aforementioned Nappa leather, Hedrick points out, was lengthy in its sourcing and development; it is tanned without chromium, in keeping with Kia’s environmental initiatives (Sprague says that Kia is #37 on Interbrand’s list of “Global Green Brands.”) The driver has a 16-way power adjustable seat; the rear passengers have the ability to recline their seats. There are 110-ft3 of passenger volume in the vehicle. The headroom in the front is 40.2 in. and 37.6 in. in the rear (not a great loss to the roofline: speaking of the roof, it is a panoramic sunroof from fore to aft); legroom is 45.9 in. in the front and 38.2 in. in the back.

Building it. Hedrick says that the K900 has an advanced body structure that includes 75% high- and ultrahigh-tensile strength steel (Hyundai Group, of which Kia is a part, owns a steel company). There is a center pillar ring reinforcement and cross brace that are hot stamped. Not only does it provide good torsional rigidity and enhance safety, it also contributes to reduced NVH. There is such a concern with creating a solid structure that in addition to spot welding body-in-white components, they use approximately 85 m of structural adhesive to supplement the welds.

Safety isn’t simply predicated on steel and assembly. The K900 features what Kia calls its “Advanced Vehicle Safety Management” system, which is a fusion of systems and functions. It includes the electronic stability control and the various front, rear and side sensors. If a potential collision is detected, then the systems kick in, warning the driver (audible alarm, warnings on both the heads-up display [yes, it has one] and the center TFT LCD cluster, and, if that’s not enough, a cinching of the front seatbelts). The brakes are precharged, ready to react.

Speaking to the issue of NVH, Hedrick also points out that there are over 200 covered or coated points, a generous use of noise-reducing materials, and the use of laminated glass for the front and side windows. There is a full underbody pan to help with aero and to reduce wind noise.

And all that quiet is good because there is a 900-W Lexicon audio system, the most powerful Kia has ever offered. It features a trunk mounted 12-channel digital amplifier and 17 speakers, one of which is an inverted subwoofer that’s located in the rear parcel shelf, an orientation that minimizes taking up trunk space. And while on the subject of the trunk, it is worth noting that whereas some larger sedans sometimes minimize the trunk space in order to achieve greater rear legroom, that’s not the case for the K900, which is designed such that there is a capacious 15.9-ft3 cargo volume, along with the 38.2 in. of rear leg room.

If there was ever any question about the international nature of the auto industry, the career of Peter Schreyer ought to answer it. Schreyer, a German, went to school at the Industrial Design School of Applied Arts in Munich. He studied at the Royal College of Art in London in 1979 on an Audi scholarship. He was to work for Audi from 1980 to 2002, during which time he did a stint at the Audi design studio in California. He became chief designer at Audi, then moved over to Volkswagen until 2006, when he was hired by Kia. In December 2012, he became the first non-Korean president of Kia, and he has subsequently become a president and chief design officer of Hyundai Motor Group, meaning he has involvement with both Kia and Hyundai.

While Schreyer certainly has more time on the ground in Europe and Asia, he would be widely recognized in the U.S. as the person in the 2014 Kia Soul television commercial designing the vehicle that the hamsters-getting-buff eventually drive. (That isn’t Schreyer, but a design double.)

In addition to being a car designer, Schreyer is an artist, a painter. About that latter endeavor, he says, “I’m thinking about it every day. It gives me some inspiration for my job, as well. With art, you want to express yourself, whether someone likes your work or not. When you design something, you need to do something that maybe 500,000 people will want to buy and be proud of.” He says working on art is good mental exercise.

He also likes jazz—“a lot.” And he sees a correlation between jazz and his job: “As car designers, we are not playing from a sheet with the notes on it. We have to improvise and combine things all the time—sometimes very quickly.”

And this is not being a solo artist: “Car design is team work.”

Talking to the design approach taken by Kia, he points out that as a car company, it is in a far different place in its development than the firms that have been on the scene for years. While, say, BMW is undertaking a new approach with its i3 and i8, cars that look entirely different than its [number]-Series cars, “We are doing the fresh, new stuff straightaway, and not as an alternative product. At the moment we are trying to make things as advanced as we can.” They are building a fresh, new legacy in real time.

One might have thought that Schreyer was taking a big gamble when he left Volkswagen Group for a company that wasn’t even thought of in the context of world-class designs. And he probably did. But Schreyer says of his move, and of creation in general, “If you don’t take a risk, you will stay where you are.” He acknowledges, “When I first started, I knew there was some potential. I was confident that I could make a change and do something. I would rely on my experience.

“But I didn’t dare to dream that it would turn into what we have today.”

Peter Schreyer has led the transformation of Kia from a company that had cars that were generally only exceptional from the standpoint of a low price on the window sticker to one that has class-leading designs almost across the board.

K900 and Equus: Separated at the Platform

It is no secret that the Kia K900 and the Hyundai Equus are related more than in the context of the parent company. The Equus is the platform upon which the K900 is produced. But Orth Hedrick, Kia Motors America vp of Product Planning, points out that this isn’t a case of badge engineering by any extent.

The K900 has a mechanical, multilink suspension setup. The Equus uses an electronically controlled air suspension.

In addition to which, the K900 is built in a plant in Gwangmyeong, South Korea, while the Equus is produced in Ulsan.