Fiat has invested over €700 million to design, develop and engineer the third generation Fiat 500 (a.k.a., “The New 500”), and to prepare the production operations in its 81-year-old Mirafiori plant to produce the electric vehicle. 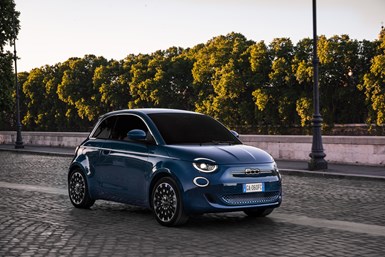 The company clearly has a lot of confidence in the car. The factory has a production capacity for the New 500 of 80,000 units per year; approximately 1,200 workers will be dedicated to the production of the car. Fiat says that it has the ability to increase the production should it become necessary.

This city car is an all-Italian endeavor, as the vehicle design and development were performed at Fiat facilities in Turin.

The vehicle features a 42-kWh lithium-ion battery pack that provides an WLTP combined cycle range of up to 320 km and up to 458 km in the urban cycle—numbers that we don’t convert for the simple reason that the WLTP cycle, even though it is “World Harmonised Light Vehicles Test Procedure,” doesn’t at all align with the numbers that come out of EPA testing, so until those numbers are established (if those numbers are established, because in 2019 Fiat sold a total 3,267 second-gen 500s in the U.S., so its not like this is something that might make a whole lot of sense for the U.S. market inasmuch as electric vehicles are not exactly flying off of lots).

Plug it in and go grab a cup of coffee.

The vehicle has the ability to DC fast charge at up to 85 kW which, as Fiat points out, requires “only 5 minutes—the same as drinking a coffee—to build up enough of an energy reserve to travel 50 kilometers within the city.” The coffee cups in Turin are smaller than they are in the U.S.