This may be a little complicated, but worth knowing, so we’ll break it down into three buckets:

(1) Nikola Corporation has been promoting hydrogen fuel cell-powered commercial trucks for a number of years and has racked up orders for them: according to the company it has $10 billion in pre-order leases for its trucks. It plans to roll out its first in 2021. 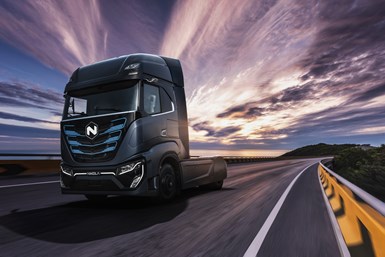 But of late the company has developed systems that are more conventional electric vehicles, such as the Nikola TRE, which is based on the IVECO S-Way tractor. The TRE will be equipped with a 720-kWh modular battery system. According to Nikola, the battery is designed so that it will be able to be mated to a fuel cell at some point in the future, thereby permitting it to be charged by hydrogen, not a plug.

And, of course, no vehicle company in the alternative energy space can be without an announced pickup, so last month Nikola unveiled the Badger, which the company says will be coming in September 2020 (the 2021 date is for the full-on commercial trucks).

(2) According to the headline on its homepage, “VectoIQ is the premier partner for leading organizations participating in the rapid transition towards Mobility as a Service and an Autonomous Vehicle society.” Which we sort of understand. 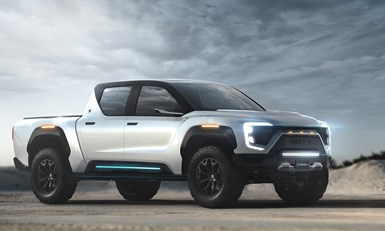 The Nikola Badger: said to be fitted with a fuel cell and batteries. Odds are that at launch there will be batteries, with fuel cells to come at some point in the future.

It describes what it does as: “VectoIQ partners with startups providing counsel: regarding strategy, capital and solutions.  We facilitate access to OEMs, suppliers and others along the value chain, to ensure your technology and ideas have the highest probability of commercialization.”

Which we think means (a) it has money and (b) it knows people.

Steve Girsky is the managing partner at VectoIQ. He is a former vice chairman of General Motors. Before GM he was a managing director at Morgan Stanley. Girsky knows money. Girsky knows people.

(3) Today Nikola merged with VectoIQ. According to the company, the pro forma enterprise value of the merger is on the order of $3.3 billion. The transaction includes a $525 million fully committed common stock private investment in public equity (PIPE) at $10 per share.

Girsky is on the board of what is being named Nikola Corporation (yes, the same as the pre-merger company). It will be listed on NASDAQ.

Seems like the alternative powertrain company out of Phoenix, Arizona, has just gained a whole lot of traction.