The North American Automotive OEM-Supplier Working Relations Index (WRI) has been conducted 19 times, and during this period of time Toyota and Honda have dominated when it comes to being thought by Tier 1 suppliers as being the best customers overall. For the just-released study Toyota had scored 336 points; Honda came in at 328.

Then there is a non-trivial drop to third position, which was taken by General Motors, at 283.

What is startling to note about the last named is that of the four not Toyota or Honda, FCA had the highest score among the others; in 2004 it had a score of 302 points, a number that has not been equaled by it or GM, Ford or Nissan since. 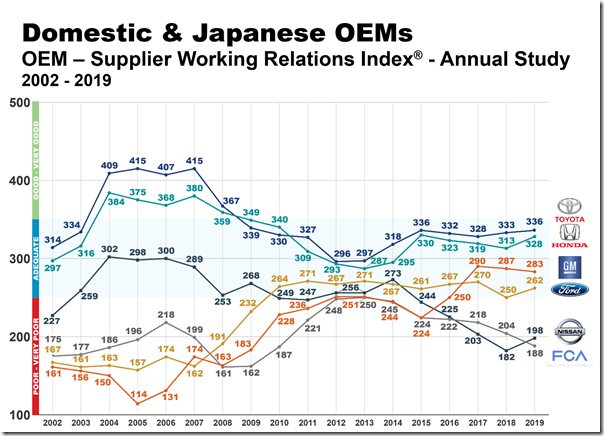 This year’s study was conducted, for the first time, by Plante Moran, an accounting, tax and consulting firm, which purchased the study from Planning Perspectives Inc.

One of the slices of the study that is rather telling is the WRI by purchasing area, which encompasses Body-in-White, Chassis, Electrical & Electronics, Exterior, Interior, and Powertrain.

In terms of the companies scoring highest, again there are Toyota and Honda, though it is worth noting that in this case Honda is preferred in four out of six categories (Body-in-White, Electrical & Electronics, Interior, and Powertrain).

In terms of the companies scoring the lowest in the WRI purchasing areas, it is FCA finishing last in all but Interior, which was taken by Nissan.

So why does this matter?

According to Dave Andrea, principal in Plante Moran’s Strategy and Automotive/Mobility Consulting Practice, “Industry has constrained resources. Look at the headcount reduction going on throughout the entire industry—even though we are at near record-high production volumes. Human resources are more constrained. And Wall Street is putting heavier pressures on companies for ROI, and there is more private equity ownership, to there is greater pressure to focus business on profitable customers.”

Or as he puts it more succinctly: When it comes to suppliers making choices of where to do their best business, “they go to preferred customers.”

Which brings us back to Toyota and Honda.

(However, Andrea notes that there are good opportunities for suppliers within particular programs at OEMs that aren’t one of those two. For example, what supplier wouldn’t want to be on a program like the Ford F-150?)

Andrea says that one of the real challenges that OEMs need to grapple with are the changes being wrought by technological innovation and legislation: the increases in autonomy and electrification. These are areas that companies need help with from the supply base, and, again, those OEMs that have better supplier relationships are more likely to get the kind of help they need to deliver on automation and electrification.

He provides an example. Say there is an increase in demand for battery electric vehicles. And let’s stipulate that there is a constraint in overall battery capacity. “I would make the argument,” Andrea says, “that the companies with the better working relationships will have the ability to capture the available allocation.”

Putting that aside, the current OEM-supplier arrangement is fundamental to the way any OEM can go to market, given that, according to Plante Moran, some 60 to 70 percent of the content of a vehicle comes from the supply base.

As in any endeavor, it is better to have people who like you than people who simply tolerate you.