While it seemed as though the retro design phase went away with the PT Cruiser and the Chevy HHR, a startup out of LA, Zero Labs Automotive, has decided that it would take the design of a first-generation Ford Bronco (say circa ’76, given the round headlights) and produce carbon fiber body panels for the exterior and swap out the straight 6 or Windsor V8 and install a 360-hp permanent magnet electric motor from BorgWarner and a 70-kWh lithium-ion battery pack that will provide an estimated 190-mile range, add contemporary electronics and. . . . 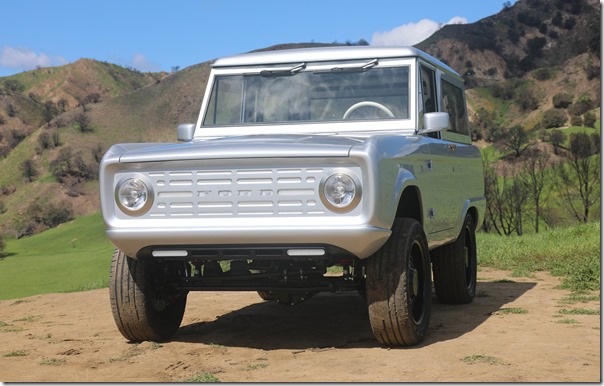 But as it says on the Zero Labs website: “Ford” and “Bronco” are registered trademarks of Ford Motor Company. Zero Labs Automotive, LLC is not connected, sponsored, approved, endorsed nor, in any way, affiliated with the holder of these marks.

CEO and founder Adam Roe said of the “Zero Labs Ford Bronco,” “I am proud to say, after three years and thousands of hours in development, we have created a meaningful production vehicle so unique that one look is all it takes to forever change the way we separate the relationship between our past and our future.”

I’d argue that as charming as the Zero Labs vehicle looks, Volkswagen actually has a better take on the past meeting the future, as it has taken the Meyers Manx dune buggy from the ‘60s and created the ID. BUGGY concept vehicle: 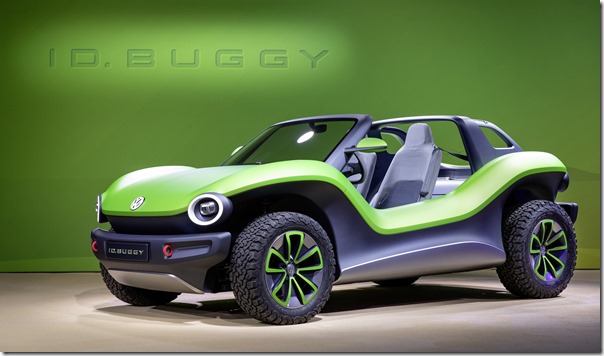 This is a design that acknowledges its forerunners while looking like the future.

(And earlier this week, prior to bringing the ID. BUGGY to the floor of the New York International Auto Show, VW held a reception at a local hip venue where Bruce Meyers, the man behind the Manx, was in attendance and one of his vehicles on display: no disclaimers there).

The ID. BUGGY, incidentally, has a 201-hp electric motor and a 62-kWh lithium ion battery and has a projected range of 155 miles.

While it is a concept, there is the potential that it could readily become real.

It is based on the VW MEB electric vehicle architecture, which is underpinning the multitude of EVs that VW will be rolling out over the next few years (Volkswagen Group plans to have 22-million EVs by 2028, as Dr. Herbert Diess, chairman of the board of management, said in Shanghai on April 15). Which makes it all the more probable that they could produce the dune buggy with most of the engineering costs amortized, as well as scale-driven cost downs for the motor and the battery, which could mean that it could be a profitable low-volume vehicle.

Zero Labs is taking no-money-down reservations for 150 first edition versions of its Bronco. Given Zero Labs’ proximity to Hollywood, odds are they’ll sell every one of them.