The Steering Wheel: How Did We Get Here?

Six key Mercedes steering wheel designs of the past bring us to its all-new design for 2021.
#tech #MercedesBenz #Daimler

Hans-Peter Wunderlich, Creative Director Interior Design at Mercedes-Benz, puts it quite simply: “Steering-wheel design is a world of its own and a very special challenge that is often underestimated.”

The new Mercedes E-Class models are available with two steering wheel designs. There is the “Luxury” version, which has its control surfaces on what are meant to resemble flower leaves. There is the “Supersport,” which has a set of double-deck spokes that are said to be “reminiscent” of the wheel wing nuts on a sports car. 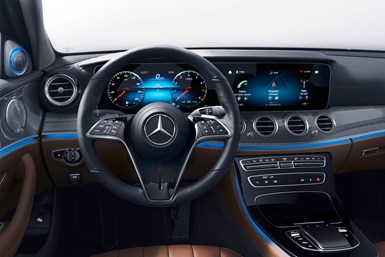 But what makes these steering wheels significant is that they feature smartphone-like capacitive capability. There are two sensor mats, located on the front and back sides of the steering wheel rim. When the wheel is gripped, assuming that there is a sufficient amount of force, there is a change in capacitance which is converted into a digital signal by a control unit. Consequently, it is determined whether the driver is using the steering wheel. Should the system determine that when the car is in semi-automated driving mode and the steering wheel has not been engaged by the driver for a set period of time, there is a warning given to the driver. If that doesn’t result in the wheel being taken, then the system activates Emergency Stop Assist. In addition to which, on the aforementioned control surfaces the “buttons” used to control various functions are also based on capacitive sensors so that taps and swipes familiar to smartphone users are used to make selections.

But how did the steering wheel develop? Here’s a walk-through key moments in Mercedes history:

The Benz Patent-Motorwagen. No wheel. A lever.

A Panhard & Levassor (powered by a Daimler engine) is the first car with a steering wheel. It was invented by French engineer Alfred Vacheron.

Mercedes 220 S Ponton. Note that by this time there is a horn ring. The gearshift was placed on the steering column.

The S-Class 220 features a multifunctional steering wheel that was integrated with the COMAND (Cockpit Management and Data) system. The driver could control functions via thumb activation.