Yes, they work on vehicle designs for BMW. But as a leading design firm, they’re taking on plenty of things that don’t have wheels and tires.
#MINI #TriumphMotorcycles #BMW 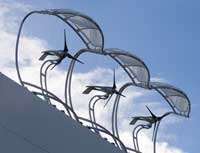 BMW's Designworks USA created the design of this wind turbine for AeroVironment. While it isn't the sort of thing that someone might associate with a firm that is not only owned by a vehicle manufacturer (think about it: this turbine system is for buildings), according to Verena Kloos, Designworks president, it is part and parcel of the design challenges that the firm takes on every day.

They've done work for companies ranging from John Deere to Nokia. Deutsche Bahn to Mary Kay Cosmetics. This is a flight deck for an Embraer jet they've recently designed. Verena Kloos says she'd like Designworks to have the opportunity to design an entire airport.

Verena Kloos has a degree in industrial design from the University of Fine Arts in Braunschweig, Germany. Kloos was the design director of VW’s studio in Simi Valley, CA, from ’91 to ’94. She was the head of DaimlerChrysler’s Advanced Design Studio in Como, Italy, a location where interior designs are developed for Mercedes cars. And for the last 3.5 years or so, she has been back in California, this time in Newbury Park, where she is the president of BMW Group Designworks USA, the firm that was established in 1972 by Charles Pelly, and acquired by BMW in 1995.

When asked what she would like to work on that Designworks has yet to handle, she responds: “I would like to do a complete airport design.” That’s right: an airport. Maybe it has something to do with the amount of traveling she’s done.

Designworks has two other offices. One is in Munich. As that is where BMW is based, that’s not entirely surprising. The third office is in Singapore. One of the reasons why: “We have gained over the years lots of knowledge about the actions, reactions, expectations, and needs of consumers. We have set up the third location in Singapore to investigate what is going on in Asia.” It is important for designers to have, as she puts it, “contextual thinking.” Context is key.

The company has about 150 people in its employ. Yes, it is involved in design work for BMW. And for MINI and Rolls-Royce, as well. But no other car companies. Among the vehicles that they’ve worked on include the X5 SAV and the previous-generation 3 Series (the E46, first introduced in 1998).

But while those vehicles are, perhaps, most visible in the auto industry, Designworks is making its mark on a range of other products. Kloos enumerates the products they work on in such great number that it is hard to keep up with it: “office phones, office furniture, cells phones, lawn mowers, printers, scanners, outdoor furniture, dental equipment, bikes, boats, aircraft interiors. . . .” They work with companies ranging from adidas to Whirlpool, Airbus to Wired. The organization, she explains, is separated into five main areas: Infotainment, Life & Leisure, Objects & Space, Industry & Travel, and, yes, Cars & Motorcycles. In her words, “From small to big, from high-end to whatever is surrounding us in our 24/7 lifestyle.” In other words, they take on most anything in one’s daily environment.

So what’s the functional organization that can accommodate this wide-ranging array of products? Essentially, there are sections handling communications, transportation, product, and automotive design. There is a group addressing strategies and research. So take, for example, the work the company has recently done for Embraer, the Brazilian aircraft manufacturer. Designworks executed an interior design for a medium-range (think coast-to-coast) aircraft, from the cockpit to the seats to the tables to the storage. “When we do a project like that,” she says, “we have people from our strategy and research group, communication group, and transportation group.” They have designers. They have engineers. And so on. While she admits that they have some designers who are specialists in areas like flight decks or high-end automotive design, “we really promote the idea of cross-fertilization, cross-pollenization.”

Kloos explains that it is important to mix people in order to get different, fresh ideas. She explains that there are cases wherein a designer starts out as a product designer, then is asked to participate in a brainstorming session for the development of, say, a future BMW interior. That person may end up working in automotive interiors for a couple of years and then go on to another area.

One of the projects that Designworks recently performed for AeroVironment, Inc. (Monrovia, CA) is the AVX400 wind turbine. The three-blade wind turbine is part of the “Architectural Wind” energy-generating system for buildings. Designworks garnered two awards for the turbine, a Red Dot International Design Award in the “green” category, and an I.D. Magazine design distinction award in the “equipment” category. Certainly there has to be some specialization involved in creating something that not only has aesthetic interest, but functional value, right? “Designers are very curious people,” Kloos remarks, adding, “It is the profession of the designer to translate information into physical concepts and physical forms.” In other words, there aren’t people sitting around waiting for the next turbine project: It is part and parcel of what the designers do in taking on such challenges. “The bigger the project is, the more disciplines you will have involved.”

One of the challenges that Kloos says faces designers today—particularly as the whole idea of design has been elevated in corporate and consumer consciousnesses—is that of communicating what is being proposed and why. While everyone may have an opinion about something—and while some of those everyones may be paying clients—Kloos says that it is important for designers to lay out their rationales without “being arrogant and saying that we know better.” She adds, “When we talk to young designers, we expect that they will be good communicators—not only in their talking and explaining, but in finding the right ways to show and visualize things.”