Robert Bosch GmbH has been involved in the automotive industry for so long that in some cases it is far older than some of the OEMs it supplies.
#SAIC #Ford #Delphi 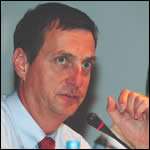 Bernd Bohr is responsible for quality, as well as for the gasoline and diesel systems divisions of Robert Bosch. Since mid-2003, he has also been chairman of the firm’s automotive technology business sector.

Robert Bosch GmbH has been involved in the automotive industry for so long that in some cases it is far older than some of the OEMs it supplies. It has maintained a methodological approach to what it does, concentrating on gasoline, diesel, chassis, energy and body systems plus, of course, electronics. Number-one in Europe in terms of turnover, it is now pursuing Delphi to be the world’s largest automotive tier-one, having seen its sales increase from €16.3bn ($19.9bn) in 1998 to €23.6bn ($28.8bn) last year, although it has only recorded slight annual increases since 2000, when it recorded €22.5bn ($27.4bn) worldwide sales. A great deal of the ranking, though, is governed by the exchange rate between the dollar and euro on any given day.

“Of the large suppliers, we are the one with the best balanced geographical base as all the others are stronger in their home markets and not so strong in some of their other markets,” says Dr Bernd Bohr, Bosch board member responsible for the automotive sector. “Around 20% of our automotive sales are in the Americas and around 15% to 16% in Asia. This growth in recent years has been due to expansion in Japan in the ‘90s so that today we have around 10,000 people in Japan with full manufacturing and development capabilities. We see this as very important in attacking the world market.”

The world market, of course, includes China, which Bohr, along with the rest of the world, sees as a vital. “We have been in China for a number of years. In fact, in 1909 Bosch opened its first office in Shanghai. We started with license relationships in the mid ‘80s on the diesel side, and entered our first joint ventures in 1994, when we took two major steps. One was on the gasoline side where we entered into a joint venture with SAIC, Shanghai Automotive, and which has since become a clear market leader for gasoline injection systems in the country. We also have full manufacturing and development capabilities and a state-of-the-art applications center and the engineering capacity associated with that. The other joint venture was with the Wuxi Weifu group in the same year which has become market leader—with more than 50%—for conventional diesels in China.”

This latter was given a major boost in August with the announcement that Bosch was entering into a new 67/33 joint venture with Wuxi Weifu to produce electronically controlled diesel injection systems, parti-cularly common-rail. Wuxi Europe-Asia Diesel Fuel Injection Co Ltd, the existing joint venture located in Wuxi, is to be integrated into the new company and it is planned that Weifu High Technology, a subsidiary of the Wuxi Weifu Group, contributes its nozzle and nozzle holder production and technical center to the new company. Total investment is put at around $325-million “It’s a really big one,” comments Bohr.

Asked whether he thought China is going to be more receptive to diesel technology than hybrids, Bohr replies: “The Chinese authorities have made it very clear in their recent auto development policy document that they want to have clean cars with low consumption because with China importing oil, if we go into mass motorization, low fuel consumption is one of the very important requisites. This document actually puts both the hybrid and the modern clean diesel as the two preferable options for new powertrains. So they are not biased, which is very good. We are not biased either, but we think the diesel has a very good chance in the country because if we don’t go beyond Euro 4, and currently China is in Euro 2/3 transition phase, then the cost side of the diesel is an advantage over the hybrid. The hybrid is more suited to downtown driving with stop-and-go, but it doesn’t make such sense when driving on open roads at a constant speed. Apart from the passenger car market, the heavy-duty and off-highway markets are also going to be very big for the diesel.”

Bosch also started local production of its anti-lock braking system last January, and is planning local production of ESP from the first quarter of 2005 to meet Chinese drivers’ increasing demand for high performance, functionality and safety. “Through local production, Bosch aims to fully support its OEM customers with the best the company has to offer and conform with auto standards across the globe,” says Bohr.

“This is the right step because China is a market which is developing its own dynamics. It already has its own specific vehicles and even now we see many cars there that we don’t see in Germany. Local manufacturing has good potential and needs local engineering capacity—it can’t be done out of Germany.”

While Bosch has also experienced a growth in gasoline systems, it is looking toward diesel systems being a major contributor to its growth in the country in the future. “We see the U.S. market as an ideal diesel one because there are relatively heavy cars and a driving style that sees acceleration to a certain speed and then constant cruising. This is ideally suited to a diesel engine, which has plenty of torque and a very high efficiency at part load. However, there are three things that need to be overcome. One is the consumer sentiment, which is still governed by diesels of the ‘80s, which were not a success, and what is seen today on heavy- and medium-duty diesels, which are not what we have in European cars.” They are undertaking a public relations program to help allay some of these concerns.

“Another nut, which is a little bit harder to crack, is the technical challenge of achieving the U.S. 2007 emissions regulations, which are very strict on particulates and NOx requirements. Technically, we can get there, we know that, but what we need to do now, and this will be something running over the next 12 months, is to make it economically feasible and have a cost-relationship benefit. However, we are quite optimistic on getting there and competing with the hybrid. However, we don’t see the U.S. market being diesel or hybrid, but rather a diesel and hybrid. For people who do more downtown driving, a hybrid is a very good solution, but if you live in the Midwest and have an SUV, a hybrid is a waste of money and resource. The diesel with its long range and high-efficiency will be a much better solution.” A remaining issue, of course, is what the regulators will do.

Overall, Bohr says that Bosch sees a steady growth in both gasoline and diesel injection systems. “We have also been bullish with direct-injection gasoline and are optimistic in its growth and in adding value per engine. We have burned our fingers several times on predicting the growth of DI-Motronic, first seen on the Volkswagen Lupo in 2000, but on the positive side, after being too bullish, we have seen a stabilization of our production figures so the one-million mark in 2008 is still valid today. What we are witnessing is a change in the direct-injection portfolio, and we are now seeing the market splitting in two directions. One is staying with stratified injection but going to spray-guided stratified injection that will give around 15% fuel economy. We are looking at piezo direct-drive injectors for high-end cars.

“The other part of the market is going to the direct injection, but not stratified: homogenous lambda one combined with turbocharging and cam control. Engines can then go in two directions: they can either be geared so that they are fun to drive because they have a high torque at 1,500 rpm like a diesel, but going up to 6,500 rpm because it’s a gasoline engine, or you can also have downsizing for a more fuel-efficient engine with a 10% to 12% fuel saving compared to a conventional engine. So if we look at our product portfolio, this is the way the market is going and both directions are good from a cost benefit point of view.

“On the safety side we see a further progression of ESP (electronic stability program). In Germany, we are over 50% fitment rate which we see increasing and we see it going up in the rest of Europe. We are now very positive on the news we are hearing from the U.S. because Ford is moving there and that will probably create some momentum amongst the Big Three and pull the Japanese along.”

Bosch is also active in steering systems through ZF Lenksysteme, its joint venture with ZF. “We at Bosch have never been very optimistic about full brake-by-wire in the near and mid-term because the cost and the technical complexity mean that the cost benefit relationship is not there for the main market,” says Bohr. “There is also the fact that the consumer might have reservations about such a system where there are only bytes between him and the road. We don’t see it in the next eight to 10 years.” However, he believes that the active steering system that is currently on the BMW 5 Series provides many of the answers. “We think this is a very promising solution because it gives around 80% of drive-by-wire functionality with 20% of the cost. So we see this progressing step by step.”