Yes, electric vehicles are increasing in number. But there’s something to be said for natural gas.
#Volkswagen #emissions

forthcoming electric vehicles (e.g., waiting continues for the Mustang Mach-E, the Lucid Air, the Hummer EV, ID.4, etc.), electricity isn’t the only means by which improved environmental conditions can be achieved (although if you think about it, many of the EVs seem to be more about being performers, not environmental stewards).

One way to achieve fewer emissions while taking advantage of an existing engine-manufacturing infrastructure is by deploying natural gas. 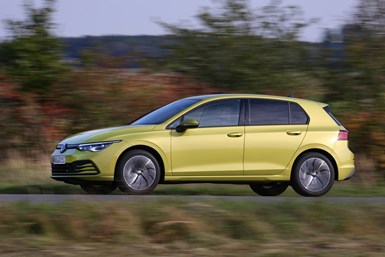 Powered by compressed natural gas—and there’s a gasoline tank, should it be needed. (Images: VW)

Despite its MASSIVE (yes, caps are justified) investment in developing fully electric vehicles (not merely “electrified”), Volkswagen is launching in Germany the Golf TGI.

This car has a 129-hp, 1.5-liter four-cylinder engine under its hood that runs the Miller cycle. That means it has a compression ratio of 12.5:1, which helps reduce emissions. What’s more, it has a turbocharger with variable turbine geometry, which increases the charge pressure and supplies more air to the cylinders, so it provides performance when the pedal is depressed.

But the Golf TGI also has three compressed natural gas (CNG) tanks—115 liters total capacity—in addition to a nine-liter gas tank. The on-board CNG is said to provide a range, on the WLTP cycle, of 400 km (248 miles). So the gasoline is considered to be a reserve, not the primary fuel. 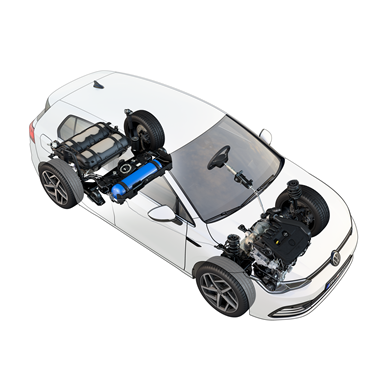 A 1.5-liter engine in the front, and CNG tanks (and a gasoline tank) in the back.

One of the challenges of EVs is the charging infrastructure, so in addition to building out charging stations (e.g., the VW-funded Electrify America), most OEMs are offering a charge-at-home setup because homes have electricity.

However, it is worth noting that whether it is for home heating, cooking or clothes drying, many U.S. homes have a natural gas supply: According to the U.S. Energy Information Agency, “About half of the homes in the United States use natural gas for these purposes.”

Presumably, just as setting up an EV charger in one’s garage requires an electrician, setting up a natural gas fueling capability would bring in an HVAC expert.

Unfortunately, the Golf TGI is not going to be made available in the U.S. market.