Although we generally don’t cover aviation—especially 110 years after the fact—it is worth acknowledging that on June 2, 1910 the world’s first non-stop double crossing (a.k.a., “round trip”) crossing of the English Channel occurred in a Wright Flier.

Primarily because it was performed by Charles Stewart Rolls, the man who, in 1904, at their first meeting, tried to persuade Henry Royce to build an airplane.

Fortunately for the history of the automobile, Royce turned Rolls’ idea down. 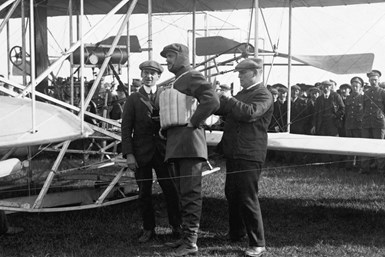 Rolls had been a flight enthusiast for some years. He was a founding member of the Royal Aero Club, which hosted the Wright Brothers when they visited England. He was a balloonist, making more than 170 flights, one of which garnered him the 1903 Gordon Bennett Gold Medal for the longest sustained flight in a balloon.

In 1910 Rolls received his pilot’s license—the second person in Britain to do so.

The record-setting flight began at 6:30 pm at the Swingate aerodrome, near Dover. According to contemporary reports, he was at 900 feet and traveling 40 mph when he reached the French costs, which brought him over the town of Sangatte at 7:15 pm. Today the Chunnel emerges at Sangatte.

Rolls turned the craft back to the west and at 8 pm was back in Dover, completing the record run. 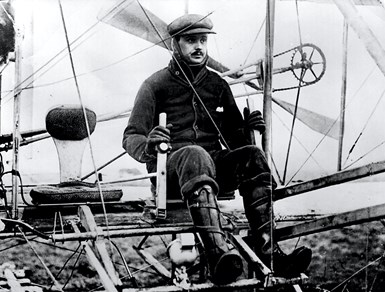 Rolls in position on the Wright Flier. (Would you cross the English Channel with that?)

Like a modern-day NASCAR driver doing donuts, Rolls, seeing the crowds of people in Dover who were there to greet him, did circles around the town’s castle.

As he told a Daily Telegraph reporter: “I decided that, as I had plenty of petrol and my engines were working splendidly, I would encircle the Castle, although it would lengthen my flight considerably.”

As if the Rolls and Royce aspect of all of this aren’t enough, there is a sad part to this story.

On July 12, 1910, the 32-year-old Rolls was back in the sky, taking part in a flying competition at Bournemouth.

He was 100 feet high when the tailpiece of his plane fell off. . .and the aircraft plunged to the ground. His skull was fractured and Rolls was pronounced dead at the scene.

Charles Stewart Rolls became the first Briton to lose his life in a powered aircraft. And the 12th person in history.