The number of auto companies that carry a family name and still have people of that name in important positions are Ford, Toyota and. . . ? Suzuki.
#TriumphMotorcycles #oem #Suzuki

The number of auto companies that carry a family name and still have people of that name in important positions are Ford, Toyota and. . . ?

Which is something that I confess to not knowing until the announcement made last week by Suzuki chairman Osamu Suzuki and Akio Toyoda, president of Toyota (the name of the company was changed from having a “d” to a “t” in 1937), that they are going to be looking at ways the two can collaborate.

While Suzuki no longer sells cars in the U.S., it continues with motorcycles, ATVs and outboard motors. But elsewhere it still sells vehicles, particularly minivehicles.

Osamu Suzuki had approached Shoichiro Toyoda, Akio’s father and honorary chairman of Toyota, about the possibility of working together in R&D. And so the two companies are now proceeding to see how this might manifest itself.

One of the things that’s notable about this is what Akio Toyoda said when the announcement was made in Tokyo. 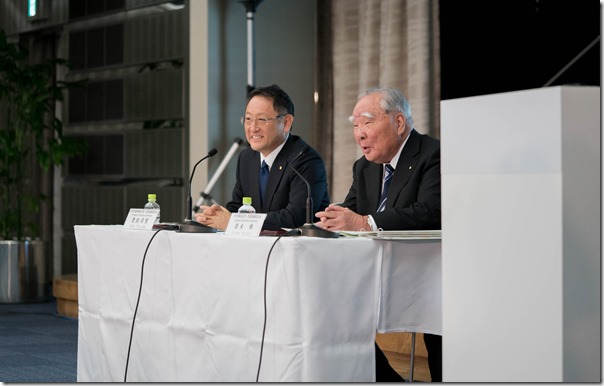 He said, in part, “Toyota is not really good at creating alliances. Traditionally, Toyota had been fixated on the need to be able to cover all of our own bases. However, as the surrounding environment is changing drastically, we need to have capability to respond to changes in order to survive. This is exactly the challenge that Toyota has to overcome now.

“We at Toyota are now making efforts for the future, such as through our initiatives which help to promote the creation of a hydrogen society, as well as R&D in the artificial intelligence and robotics fields. In these areas, we are collaborating with other companies to work together on R&D.

“Although we are still halfway there, I believe that we have to go forward with the understanding of the importance of the need to create partnerships and the establishment of standardizations.”

According to a survey in Strategy&, Toyota is the eighth biggest investor in R&D in the world and one of two auto companies in the top 10 (you may be interested to know that the #1 investor in R&D of any kind of company anywhere is Volkswagen).

Yet here is Toyoda saying that there is a need to collaborate to help realize further advances in technologies. Suzuki is undoubtedly only one of the companies that they’re talking with.

But what is all the more remarkable is Toyoda’s admission that they’re really not good at working with others, and that this is something they’re going to have to work at going forward.

While it might seem that the eighth-largest investor in R&D in the world would be in good shape vis-à-vis staying near the front of technological developments, Toyoda (and Toyota) realizes that’s not enough. Note well the “respond to changes in order to survive.”

Clearly, this is serious.

What’s all the more astonishing is that here is a company executive who is willing to publically admit that.