At the New York Auto Show last week, Toyota revealed a concept vehicle—a small four-wheel drive vehicle—that was designed at Calty Design Research in Newport Beach, California. Ian Cartabiano, Calty chief designer, says that this vehicle, the FT-4X, was designed at the same time as the Concept-i, which is all the more interesting in as much as there is a machined-like look to the body—Cartabiano notes that the idea is to make the body look like it has been created from an ingot of metal—and the Concept-i is nothing if not organically sinuous. 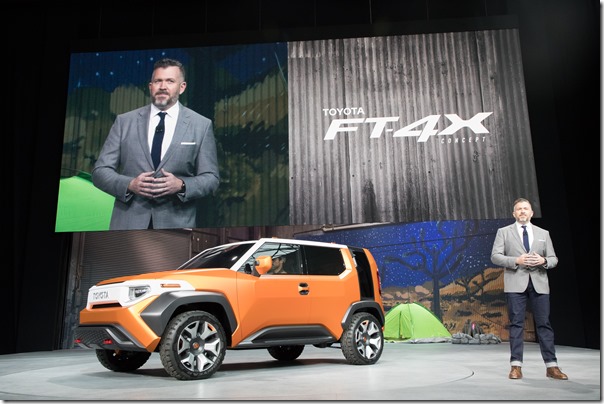 Cartabiano and the FT-4X concept

The approach that they took for the FT-4X is to create a vehicle that is capable, through its mechanical four-wheel drive system (another huge contrast with the Concept-i, which is absolutely digital), of going off road, but as Kevin Hunter, Calty president, explains, this is more about getting to the trail head or base camp than climbing over a mountain range.

In fact, the ethos that they used in design is “Rugged Charm,” and charm isn’t the sort of thing that once associates with something like Poison Spider at Moab.

Inside the cabin there is an array of equipment that is designed for outdoor use, like a North Face sleeping bag that is tucked inside a bag so that it serves as the center console arm rest when not in use, as well as a removable flashlight.

The small crossover segment is one that is growing at an impressive rate, so while this vehicle, pretty much targeted at urban millennials, isn’t a “go” for production, Bill Fay, senior vice president, Automotive Operations, for Toyota and Lexus brands, tells John McElroy and me, on this edition of “Autoline After Hours” that we shot on the floor of the New York show (actually on a stage in the Toyota stand), that they’ll make a decision about the FT-4X based, in part, on the crowd reaction to the vehicle.

Fay also talks about the overall market and why he believes that U.S. sales will come in at about 17.2-million this year, something that he and his colleagues at Toyota have long thought would be the case.

Another concept vehicle—this one a full-size SUV—that debuted in New York is the Infiniti QX80 Monograph. 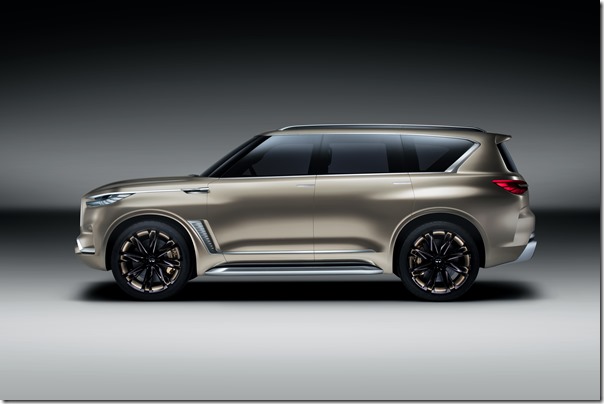 To learn more about the QX80 Monograph, as well as other vehicles, like the Q50 sports sedan, which had its North American debut in New York, McElroy and I talked with Randy Parker, vice president, Infiniti Americas.

Parker describes how the company is working to differentiate itself in the luxury market—in no small part through the creation of vehicles like the QX80 Monograph. 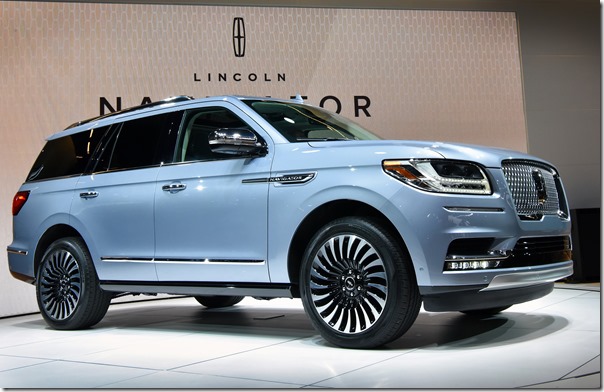 As you may recall, the concept Navigator had massive gullwing doors which, unsurprisingly, are not on the production version of the vehicle. As David Woodhouse, Lincoln design director, tells McElroy and me, a purpose of those gullwing doors was to open up the interior of the vehicle, and the interior of the production car is something that they’ve retained, it is something that Woodhouse is particularly proud of, as it represents, with its broad horizontal surfaces and keen attention to detail, what will be characteristic of Lincoln models moving forward. 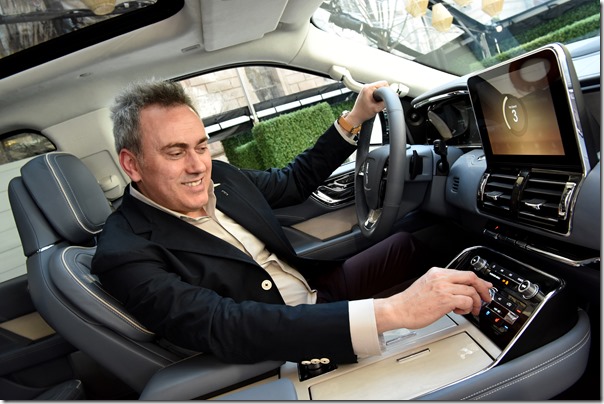 Woodhouse in the Navigator

In the luxury space Lincoln is looking to provide its customers with confidence and comfort rather than performance. (Yes, the 2018 Navigator has a 450-hp twin-turbo V6, but the point is not to do hot laps.)

Woodhouse provides insights into Lincoln’s overall approach to design, in addition to talking about what he argues is the heir to the vehicle, the 1998 Lincoln Navigator, the original luxury SUV.

And if that’s not enough, McElroy and I are joined by Sam Fiorani, vice president of AutoForecast Solutions, and Jim Henry, a freelance auto writer, to discuss what we all thought was of interest and significance at the New York Show.