Toyota Motor North America (TMNA) announced last week that it will be building a fuel-cell power generation plant at the Port of Long Beach that will be powered by “bio-waste” from dairy farms in northern California, transforming the waste into water, electricity and hydrogen.
#Toyota #sustainability #oem

Toyota Motor North America (TMNA) announced last week that it will be building a fuel-cell power generation plant at the Port of Long Beach that will be powered by “bio-waste” from dairy farms in northern California, flowing through pipelines south. (We’ll leave it at that.)

This will be what is described as “the world’s first megawatt-scale carbonate fuel cell power generation plant.”

Importantly, it will transform the aforementioned agricultural waste into water, electricity and hydrogen. A non-trivial amount.

Called the “Tri-Gen” facility*, when it goes into operation in 2020, it will produce some 2.35 megawatts of electricity and 1.2 tons of hydrogen. That is translated into enough power for 2,350 average-sized homes and the daily driving needs of 1,500 hydrogen vehicles.

All from a 100-percent renewable power generation facility. 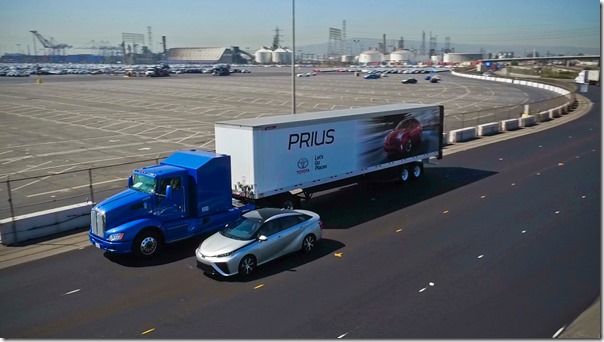 The Project Portal semi and the Toyota Mirai

The location at the Port of Long Beach isn’t coincidental, as that is where Toyota is piloting its Project Portal program, its hydrogen fuel cell-powered class 8 truck that’s a proof-of-concept operation to show that hydrogen-powered big rigs can be efficiently used for drayage operations (the truck uses the fuel cell technology found in Toyota’s Mirai sedans, but in this deployment there are two stacks rather than one and a 12-kWh battery, with the result being 670 hp and 1,325 lb-ft of torque, which results in the vehicle offering a gross combined weight capacity of 80,000 pounds and a range of about 200 miles).

The hydrogen from Tri-Gen is going to be used at the hydrogen fueling station that Toyota, along with Air Liquide, have built at the port.

Assuming that all goes as planned in 2020—and Toyota is nothing if not an exceedingly careful and conservative organization when it comes to doing things (e.g., the Toyota Production System (TPS) is predicated on planning) so there is no reason to think that it won’t—let’s hope that there is something bigger that comes out of this than just proof that muda (the TPS term for “waste”) can be turned into useful energy.

That is: Tri-Gen doesn’t stand as some sort of one-of-a-kind technological marvel (“Look at this, kids! Stuff goes in one end and energy comes out the other!”) but becomes a template for an array of energy-generating facilities that will not only boost hydrogen availability and energy independence, but will do so while having a positive environmental effect.

*Incidentally: Toyota didn’t go alone on this. Tri-Gen was developed by FuelCell Energy with the support of the U.S. Department of Energy and California agencies including the California Air Resources Board, South Coast Air Quality Management District, Orange County Sanitation District and the University of California at Irvine.