Toyota TRD in City of the Big Shoulders

For some reason, the Chicago Auto Show has the reputation of being the “truck show.” That is, if you’re going to be showing a new truck, don’t reveal it in Detroit, New York or LA, do it in Chicago.

The only rationale I can think of goes back to 1914 when then-Chicago resident Carl Sandburg published the first of what were to be collected as the Chicago Poems, a poem that you may recall from high school that opens:

HOG Butcher for the World,
Tool Maker, Stacker of Wheat,
Player with Railroads and the Nation's Freight Handler;
Stormy, husky, brawling,
City of the Big Shoulders

In keeping with the truck theme, Toyota rolled out two new grades for its Tundra full-size pickup and its Sequoia full-size crossover, two vehicles that can readily accommodate those with broad shoulders.

But in the case of both of these trucks, what Toyota has done is called on its operation that is for making trucks a bit more, well, “stormy, husky, brawling,” in effect: Toyota Racing Development (TRD), the company’s in-house tuning shop. (Yes, it is involved in the NASCAR program—and last year Toyota won the Daytona 500 (and 15 other races) and received the Manufacturers Championship—as well as in endeavors that involve deserts, rocks and whatnot.)

The 2018 Tundra TRD Sport is available on the CrewMax and Double cab configurations, 4x4 and 4x2 grades. Although the vehicle is visually TRDed—color keyed mirrors, bumpers and hood scoop; 20-inch silver alloy wheels with black accents; mesh grille with body-color surround; 20-inch silver alloy wheels with black bezels; and, lest anyone mistake it for something else: TRD Sport bed-side graphic. The inside has TRD touches, as on the shift knob and sport mats.

But it isn’t all show and no go as there are TRD Sport Tuned Bilstein shocks and TRD front and rear anti-sway bars.

The 2018 Sequoia TRD Sport is similar in some respects—as in terms of the shocks and sway bars—but it goes more toward black than body colored, as in gloss black mirror caps, black satin finish TRD sport badging on the front doors, and smoked rear tail light lenses.

On the inside, there are the TRD shift knob and floor mats, as well as TRD sill protectors. The standard seating surfaces are black fabrics; however, there is optional black leather captain chairs for the vehicle.

In addition to which, both (along with other non-TRD variants of the respective 2018 models), will feature as standard the Toyota Safety Sense package (TSS-P). It includes pre-collision with pedestrian detection, lane departure alert, auto high beam, and dynamic radar cruise control.

Were it not for the fact that in January the RAV4, with 22,155 units, outsold Camry (20,313), the other Chicago intro might have gone overlooked, but given the momentum of RAV4 in the Toyota lineup, the RAV4 Adventure can’t pass unmentioned. 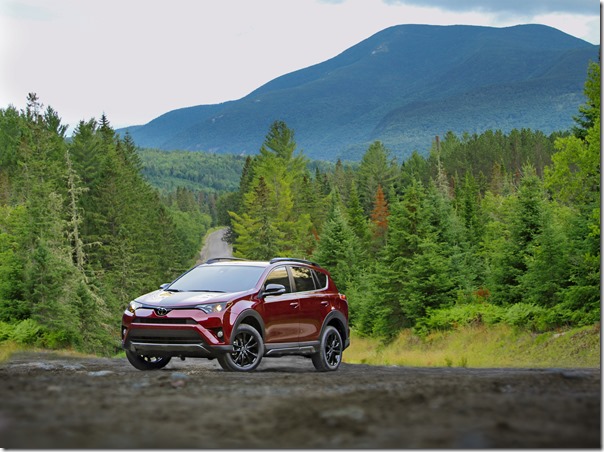 This model is available as either front- or all-wheel drive. There is a standard tow package for both, which includes an upgraded radiator and supplemental engine oil and transmission fluid coolers (if the engine is going to work harder by pulling a load, then you need to make it easier to do so), as well as a suspension system that has increased ride height.

All of these vehicles are going to be available in the fall.