Akio Toyoda, president of Toyota Motor Corp., said at CES today that his goal is to transform Toyota from being a car company to becoming a mobility company.

Which, he acknowledges, some people might find a big unusual. But then he points out that his grandfather transformed a loom company into what is now known as Toyota, so even more extreme changes have occurred. 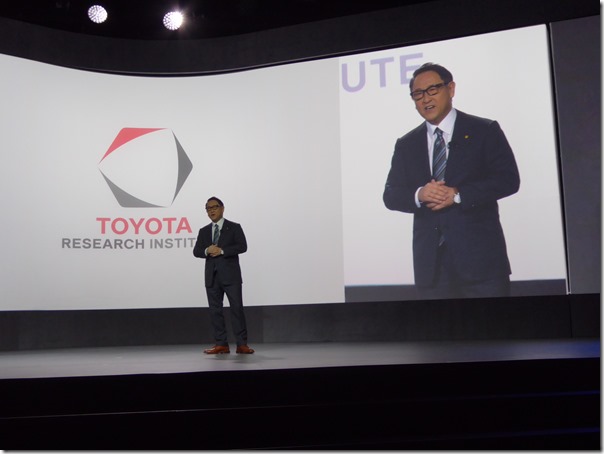 “The automobile industry,” he notes, “is clearly amidst its most dramatic period of change as technologies like electrification, connected and automated driving are making significant progress. Toyota remains committed to making even better cars.” So this is not a change that is going to take Camrys and RAV4s off the road. “Just as important, we are developing mobility solutions to help everyone enjoy their lives, and we are doing our part to create an ever-better society for the next 100 years and beyond.”

And doing that is going to call on different companies than those which are ordinarily associated with the auto industry. Companies ranging from Amazon to Pizza Hut.

Toyota has organized what’s called the “e-Palette Alliance,” which includes those two aforementioned companies as well as Didi Chuxing, the China-based ride hailing company, Uber, and Mazda (yes, a traditional auto company, but in August Toyota took a 5 percent share of Mazda, at which time the two companies announced that they would be collaborating on the development of electric vehicles).

And Toyota has developed a proprietary Mobility Services Platform (MSPF), upon which services can be built. And this will lead to what Toyoda called “Autonomous Mobility as a Service” applications—which is termed “Autono-MaaS” (say it out loud to get the full effect). 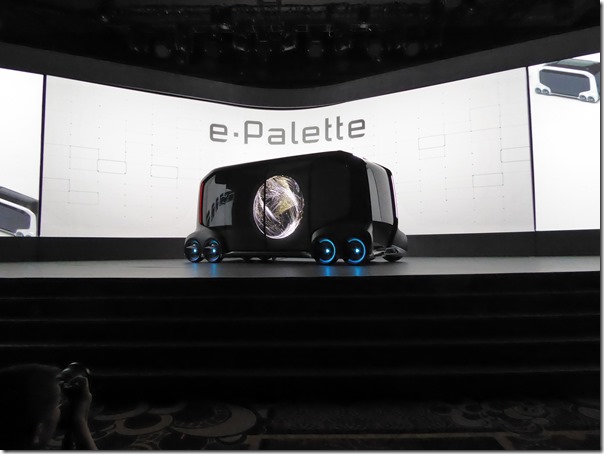 And because, let’s face it, mobility as a service or otherwise, they’ve developed a vehicle, the e-Palette Concept, an electric vehicle that operates fully autonomously. The vehicle has an open vehicle control interface that allows partner companies to install their own automated driving system, with the Toyota Guardian system underlying it to assure safe operation. (Dr. Gill Pratt, CEO of the Toyota Research Institute, which is developing autonomous driving technology, explains that there is the Toyota Guardian system that provides protection, like a safety net, and the Toyota Chauffer system, which does the automated driving. While this open system approach would mean that the TRI-developed tech would be challenged by other company’s chauffeur systems, Pratt said that they’re not only confident in what they’ve developed, but relish the competition: “Let’s say the house system”—the Toyota-developed chauffer—"not as good as someone else’s. We should be unafraid. We’ll give the companies we partner with a choice—which good for them. Good for us.”)

The e-Palette Concept is essentially a container on wheels, a container that can be filled with anything from seats for human transport to a pizza kitchen, from boxes for logistics services to 3D printers for local fabbing. The vehicle shown at CES is 189 inches long, 78.7 inches wide and 88.5 inches high, it is conceived to be built in three sizes.

Given that this is something that is going to be working in “service” applications, there is transactional considerations involved. To that end, there is a data communications module in the vehicle that transmits operational information to what’s called the “Toyota Big Data Center.” This information can then be used for purposes of determining finance options as well as determine maintenance requirements.

Although this is a concept now, the e-Palette will be evident at the 2020 Summer Olympics in Tokyo and likely to be rolled out as a production vehicle--presumably limited production, presumably to the alliance partners--thereafter.

As there is a rush to getting autonomous vehicles on the road by OEMs and suppliers alike, Akio Toyoda made an interesting comment that underscores a commitment to quality, durability and reliability that have long been hallmarks of the company, as well as a new element that is ever-more crucial, safety. Toyoda remarked: “We are less concerned about getting there first than getting it right.” 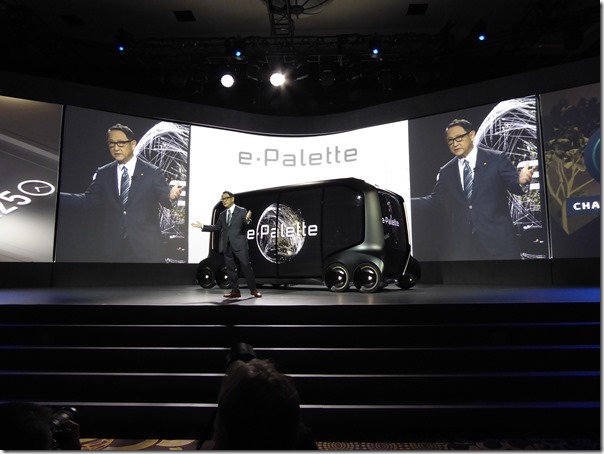