Will Nikola become the Tesla of Class 8 trucking (the Tesla semi notwithstanding)? It sure seems like a good bet. And lots of investors are betting it will
#Iveco #Nikola #sustainability

Trevor Milton is the founder and executive chairman of Nikola Corporation, a company that you’ve undoubtedly heard about, given that when the company started trading on Nasdaq June 4, the company’s stock skyrocketed to the extent that there was huge buzz about a company that is offering hydrogen-powered and battery-electric Class 8 trucks, and soon a full-size electric pickup (that can be retrofitted to utilize a fuel cell, as well). 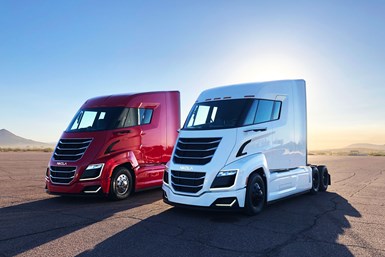 Part of the buzz is predicated on the fact that while the company has preorders for its Class 8 trucks—including an order from Anheuser-Busch for 800—that represent “more than $10 billion in potential revenue,” the company hasn’t shipped a single truck.

Next year, according to Milton, the Nikola TRE Class 8 battery-electric truck, which will be built for Nikola by IVECO in a factory in Ulm, Germany, will be available. They will soon be breaking ground for a factory in Coolidge, Arizona (southeast of Phoenix) where the Nikola Two fuel cell vehicle will be produced, starting, Milton says, at the end of 2023, start of 2023. The pickup truck—named the “Badger” and described by Milton as “bad-ass”—will be available by the end of 2021 or the start of 2022. What’s interesting about this is that the Badger will be produced by another OEM. What’s more, it will be sold and serviced by the company that Nikola selects, though it will be branded as a Nikola, not the OEM’s brand. He says there are three OEMs that are presently vying for the contract and the one getting it will be announced soon.

Milton says all this—and a whole lot more—on this edition of “Autoline After Hours,” as Milton spends the entire hour-plus talking with “Autoline’s” John McElroy, long-time green vehicle journalist Sebastian Blanco and me on the show.

From the get-go Milton talks about why Nikola is creating such controversy: “When you completely disrupt something, it sends people into a frenzy.” In his estimation, they’re disrupting the traditional auto industry—the commercial truck portion, in particular—as well as Tesla. (Musk has referred to fuel cells as “fool cells.”)

“People don’t like what they don’t understand,” Milton says. “When they can’t figure out why you can do what you do and they can’t, they hate us.”

When asked why commercial trucks rather than cars or crossovers, his answer is simple: “I love to make money.” Class 8 trucks powered by hydrogen can provide an ROI. In his books, cars and crossovers can’t.

And when it comes to the competition in that space, he says that a fuel cell semi requires a clean-sheet development. Just putting a fuel cell stack into an existing model just doesn’t’ make it.

Milton explains his comprehensive approach to zero-emissions vehicles—including how they’re making hydrogen with electrolysis—on the show.

Even if you’re not interested in hydrogen, it is something of a masterclass in industry disruption from a guy who has become a billionaire by doing it.