One of the advantages that the Toyota Research Institute (TRI) has in its pursuit of developing automated driving technology is that it is part of Toyota. Consequently, when it needs to have vehicles developed for real-world testing there’s, well, Toyota.

TRI is introducing P4, its newest generation automated driving test vehicle, at CES next week that’s based on a 2018 Lexus LS 500h AWD; this LS is the fifth generation of the luxury sedan, which is based on a new platform (code named: GA-L). One of the areas addressed when developing the new platform was the chassis; the P4 takes advantage of the array of chassis control technology offered by the car (e.g., systems that control basic longitudinal, lateral and vertical motion, yaw, roll and pitch), as well as the steering controls. 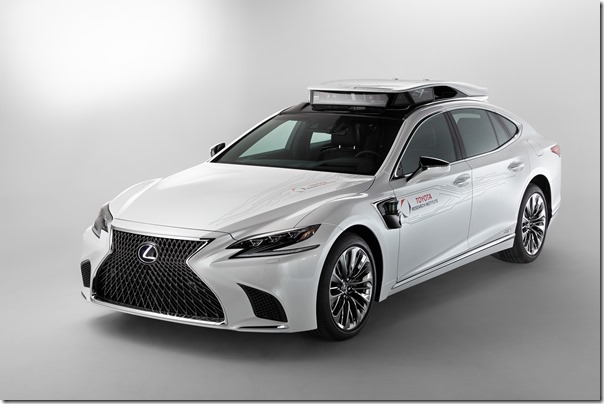 And the “h” in the LS 500h indicates that this is a hybrid vehicle.*

TRI is developing two levels of automated driving technology, “Chauffer” and “Guardian.” P4 will be used for both development tracks.

Ryan Eustice, TRI senior vice president of automated driving, explains the two: “Our Chauffeur development is focused on full autonomy, where the human is essentially removed from the driving equation, either completely in all environments, or within a restricted driving domain.

“Guardian, on the other hand, is being designed to amplify human performance behind the wheel, not replace it.”

So for the former you’re driven and for the latter you drive.

The P3 was introduced earlier this year, and they’ve taken some of the tech and the learnings from that vehicle and used it for the P4. For example, there are two new imaging sensors (one sensing forward and the other rearward) and two additional cameras (including a thermal imaging type). 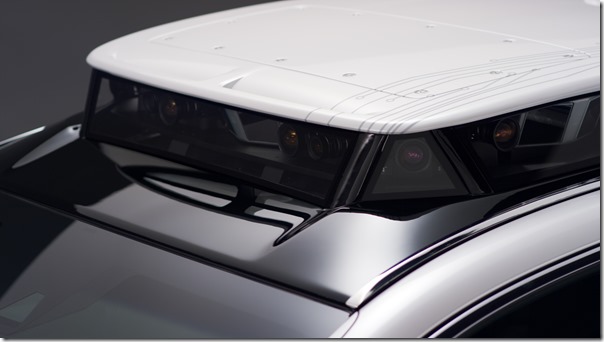 They’ve improved the radar system, focusing on improving the field of view around the vehicle, particularly at close range.

The eight scanning LiDAR units (TRI is using Luminar LiDAR units for long range scanning and Velodyne units for near-field—but it is worth noting that in March 2018 Toyota AI Ventures added Blackmore Sensors & Analytics to its portfolio, a company that is developing LiDAR systems based on frequency-modulated, continuous wave technology, which allows simultaneous measurement of range and velocity, so presumably when they get to P5. . . ) are carried over from P4.

Although one could argue that the P4 is a science project, it certainly doesn’t look like one, with the various sensors mounted like so many spinning cylinders and objects that one might find in the backroom at a Fry’s Electronics.

Explains Scott Roller, CALTY senior lead designer, “We took a holistic approach to integrating autonomous componentry into the design of the new LS. The result is a fluid surface embracing advanced technology loosely inspired by science fiction in the graphic separation between form and function.”

Of course, another aspect is that they have a handsome design (i.e., the LS) to base their work on.

And there is another benefit. “Toyota” is synonymous with excellence in manufacturing. The P4 isn’t just a kluge, but carefully engineered and assembled. The assembly and integration work are being done at Toyota Motor North America R&D’s Prototype Development Center in York Township, Michigan (which is about 14 miles due south of the facilities in Ann Arbor).

As previously mentioned, the P4 is based on a hybrid Lexus. The engineers are taking advantage of the hybrid battery system for powering the compute system used to direct the vehicle. And it is worth noting that they designed the packaging for the compute box, such that it is placed vertically in the trunk behind the rear seat transom, thereby opening up space for cargo. (Of course, as this is a development vehicle, there is the ability to fold the computer downward so that there is access to the circuitry.) 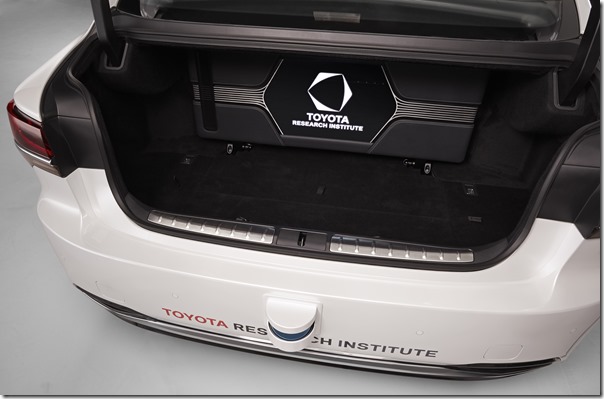 While the specific number of P4s being made (or P3s that have been made, for that matter) isn’t being revealed, odds are good that they’ll build as many as they need to do the automated driving development work.

*One of the interesting things to note about automated vehicle development is that other companies—such as Waymo and Apple—use Lexus hybrids as test vehicles (those two companies have been using RX models). So what’s behind that? According to Paul Williamsen, who is with the Lexus International Launch Planning Group in Japan, the reason is based on the technology of the Lexus hybrids. Williamsen points out that the developers of automated vehicles have their hands full dealing with sensors and controls and all of the rest related to handling the inputs required for automated driving. So the output side—the control of the vehicle—is something that they would probably rather not deal with. So that leads to Lexus. Or, as he explains, “Every one of our hybrids since 2006 has by-wire capabilities for throttle, steering and braking. And most models can be ordered with active shock absorbers, too.” He notes that the importance of active shocks is that they can “significantly improve the response time of the vehicle to steering or braking commands.” 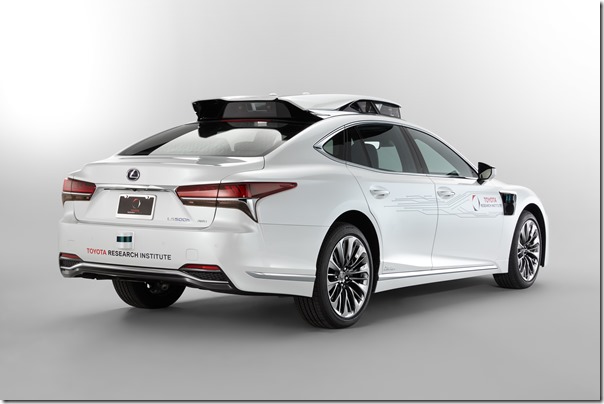 Because of the by-wire arrangement, “it’s all integrated between the powertrain control and the stability control on a Lexus, so non-automotive researchers don’t have to waste time making steering actuators, brake and throttle application solenoids, or fitting special shocks,” Williamsen says.

(And let’s face it: If you’re spending countless hours in a development vehicle, a Lexus is certainly a nice one to be in.)