Truck vs. Truck; Steel vs. Aluminum

According to Sandor Piszar, Chevrolet truck marketing director, “We engineer and build our trucks with customers’ expectations in mind.”
#Ford #Chevrolet #oem

According to Sandor Piszar, Chevrolet truck marketing director, “We engineer and build our trucks with customers’ expectations in mind. For example, Silverado features a roll-formed, high-strength steel bed because truck customers demand the ability to haul their toys, tools and other cargo.”

What customers don’t expect—at least customers of the 2016 Ford F-150, Piszar goes to point out in a fairly compelling manner—is that the bed of their trucks can be severely damaged by other cargo, like wedge-shaped strikers. 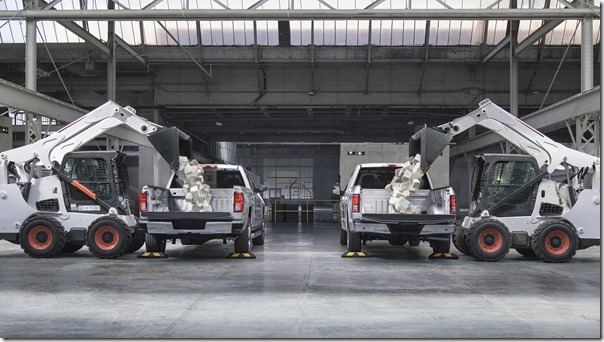 That is, they took a Silverado with its steel bed and the F-150 with its aluminum bed.

They dropped the wedge-shaped striker, which weighs 17 pounds, into the bed of each truck.

At 90 joules of impact energy, the Silverado bed was no longer intact.

By contrast, the aluminum bed was punctured at 40 joules. (It showed hairline cracks at 30 joules.)

In another test, they took 55 landscaping blocks, a mass of approximately 825 pounds, and dropped them on the beds of each of the trucks from a height of five feet.

The Silverado came through with dents and scratches in 12 comparisons (that they videoed for marketing purposes).

The F-150 didn’t do as well: there were punctures 12 out of 12 times, according to Chevy, and an average of 4.3 punctures per drop. At least being aluminum the holes wouldn’t lead to areas that would rust.

Then they dropped a steel toolbox off the side rail of each truck 14 times. The Silverado bed was dented 12 times and showed a small puncture in the other two tests.

The F-150? The tool box only dented the bed in one out of 14 tests. The other 13 times there were punctures.

Apparently, it isn’t just that high-strength steel is being used. The roll forming process that they’re using is said to reduce metal fatigue as compared with stamping operations, thereby helping make the steel stronger.