You may not have heard of Arrival, a British electric vehicle company, but odds are it is going to become more prevalent in the conversation thanks to a focus on commercial vehicles
#Tesla #Hyundai #Rivian

Although there is seemingly endless anticipation for the Tesla Cybertruck and the Rivian offerings, what is probably the true direction of electric trucks is represented by the announcement from UPS that it has ordered 10,000 purpose-built electric vehicles from Arrival, a British company that was established in 2015. 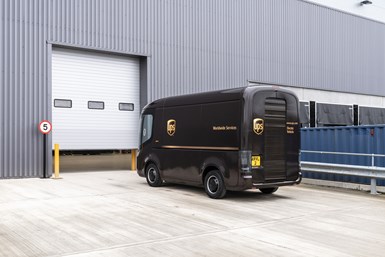 The trucks are to be manufactured between now and 2024.

Arrival has a build facility in Banbury, Oxfordshire. But the company says it has a strategy of “microfactories,” which means that it will build vehicles close to where they will be used. The trucks UPS has ordered will be used in the UK, Europe and North America, so evidently there needs to be at least a couple of microfactories more added to the mix.

Have It Your Size

The Arrival Generation 2.0 is a platform that allows the vehicle to be sized as required. Yes, something like the Rivian “skateboard” approach. By having a platform that includes much of the important EV content, the top hats can be added to meet specific capacity requirements.

As for details regarding the trucks are scant, when asked about the range, Arrival spokesperson Imogen Pierce responded that the range of a vehicle can be “up to 300 km,” and she added, “but because we can customize we can reduce the range for customer who actually end up only using 30 miles per day.” Apparently, that is characteristic of more vehicles than you might imagine making deliveries in urban areas.

In addition to placing the order for the 10,000 trucks, UPS has an option to purchase an additional 10,000. What more, the UPS investment capital arm has made an investment—amount undisclosed—into the company.

This on the heels of a €100M investment made earlier this month by the Hyundai Motor Group in Arrival.

About that, Albert Biermann, President and Head of Research and Development Division at Hyundai Motor Group, said, “The eco-friendly vehicle market in Europe is expected to grow rapidly due to reinforcement of environmental regulations. Through the joint development of commercial electric vehicles with Arrival, we will be able to gain a competitive advantage and progressively establish our leadership in the global eco-friendly vehicle market.”

Clearly, the commercial vehicle space is going to be key for electric vehicles.