V2X: What You Should Know

Ulrich Staehlin, Head of Subsegment Vehicle to X Communication, Continental North America, says that he’s been working on V2X communications from back in the days when it was research and trials. In other words, he’s a veteran of V2X. Now he’s working on deployment.

About what it means to be a veteran in this space: Staehlin has been working on V2X for “more than 10 years.”

Yes, things are moving quickly so even a mere 10 years makes one a veteran in this space. 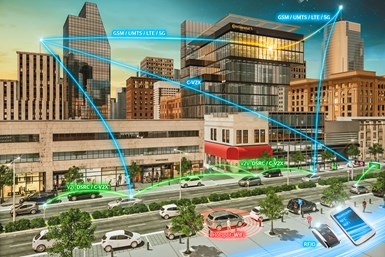 This is what vehicle-to-everything (V2X) looks like. (Image: Continental)

V2X: Probably Not What You Think

Staehlin says that “V2X” has been used by plenty of people over the years to describe plenty of different things.

“’V2X’ was first used for using communication technology to save lives.”

He adds, “For me, it is anything related to saving lives and the driving tasks of the car itself—not all of the other things that are normal telematics functionality. If you don’t pay attention to what you use the word for, you get into weird discussions because two people think they’re talking about the same thing but coming from different directions.”

Early on, Staehlin says, researchers were analyzing accent statics, looking at how accidents were occurring and how they could have been prevented.

“They saw a lot of accidents where the normal surrounding sensors like cameras and radar couldn’t prevent them just because of pure physics.”

That is, cameras and radar can’t see around corners.

If you are entering an intersection on a green and there is someone on the cross street barreling along at a high speed, that vehicle may not be seen but also may intersect with your vehicle by the time you’re in the intersection. That’s where V2X can help.

“I always say that V2X is a sensor that looks around a corner or looks through obstacles such that you are aware of something before your surrounding sensors can detect it,” Staehlin says.

He explains that one of the things that a V2X system in a vehicle does is to send out a location signal: “At one point this was called the ‘Here I Am’ message, and I liked that a lot because it is the core idea.”

So in the case of the vehicles both approaching the intersection, the announcement(s) can help prevent a collision.

The “X” means “everything.”

This is not theoretical: In December 2016 Audi of America announced “Traffic Light Information” that was being offered on several of its vehicles and functionality that would work in Las Vegas, where the Regional Transportation Commission of Southern Nevada became the first organization to institute communications from traffic signals to vehicles. In this early case, the amount of time before a red signal would turn green was displayed to the driver.

V2X and “autonomous driving” are not synonymous. “Automated driving is a functionality that uses V2X,” Staehlin says.

So if there is a message in the gauge cluster indicating that there is an emergency vehicle coming from the right or a countdown clock indicating the time to green, it is still useful.

The driver is provided with additional information that is helpful to the safe driving tasks.

“We don’t have to wait until something is done automatically. We can do something beforehand.”

Of course, automated driving can benefit greatly from V2X.

Staehlin describes the act of merging on a freeway.

You’re on the ramp. Checking your mirrors. Looking over your shoulder. Wondering whether that vehicle is going to let you in.

“With automated driving,” Staehlin says, “every vehicle knows what it wants to do, so why not have it say ‘Please let me in’ and the other vehicle can respond, ‘I’ll decelerate a little and you can get in.’”

At its most basic, it is a matter of transmitting and receiving messages.

There is the issue of making sure that the message is fully received. And of preprocessing the data for subsequent use by the applications on top of it. There are a number of architectural approaches that OEMs can take to the V2X system, depending on what technology is there and what structure is being required.

There are two types of V2X systems.

One is IEEE 802.11p based. It is sometimes referred to as “DSRC,” for (direct short-range communications). The other 3GPP C-V2X. The former is, in effect, WiFi-based and the latter cellular.

Needless to say, there are strong proponents of each. Continental offers both as well as a hybrid solution that combines both—but Staehlin points out that it is one or the other: you can’t use both at the same time.

The debates between the proponents of each are rather heated.

And the Federal Communications Commission (FCC) is even adding to the friction. Back in 1999, the FCC set aside 75 MHz of the spectrum for the development of things like V2X. But as time has marched on and the deployment of V2X has been slow, it is proposing to take 45 MHz of that for unlicensed use. Meaning not just for automotive. In addition, in December 2019 it proposed that the middle 10 MHz of the spectrum would be dedicated to DSRC and the top 20 MHz for C-V2X.

How this will shake out remains to be seen. Ford has announced that it is launching C-V2X in its North American models in 2022. Volkswagen is putting DSRC in its 2020 VW Golf 8.

Staehlin: “We are coming at this from the usage, not the technology. We want to save lives.”

Which is where it has been for Continental and V2X from the start.