The automaker with the best solution for reducing weight will be the one with the clearest vision of the endgame and the strategy to get there.
#Dodge #BMW #Tesla

If you’re looking for the latest material, software or structural tweak that will lead your vehicle program on the way to lightweighting nirvana, turn the page. You’re not going to find the goose that lays golden eggs here. It doesn’t exist.

What Do Boats Have to Do With It?

“Years ago, a consultant told me there are two ways to make progress: a motorboat or a sailboat. With a sailboat, you tack back and forth with the wind in order to reach your destination while, with a motorboat, you drive toward it. However, if you don’t know where the endgame is or follow the path that points toward it, you’re not going to get there very quickly, and — like the sailboat captain — you’ll tack in one direction, recognize your mistake, tack in another direction, run into another mistake, and so on.”

The speaker is Chris Theodore. You may have heard of him, or at least some of the projects and companies he’s been involved with: the second-generation Chrysler minivan, the Plymouth Prowler and Dodge Viper, the 2005 Ford GT, AMC, Chrysler, Ford, Saleen, and now his own consulting business (Chris P. Theodore and Associates; theodore-associates.com). He has run programs at most every level, from skunkworks to mass market, and has seen both types of boats and the captains who piloted them. 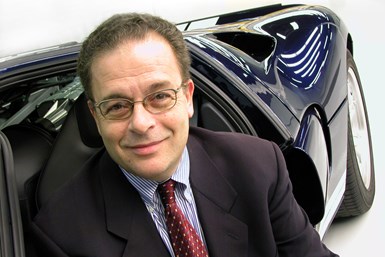 Chris Theodore and his beloved Ford GT, a vehicle designed around a lightweight aluminum structure that could support the production of other high-performance designs.

Take, for example, two car companies at opposite ends of the alphabet, BMW and Tesla. Both created bespoke electric architectures designed to minimize the high cost of batteries while maximizing vehicle range. “At the time,” says Theodore, “batteries were quite expensive, and the more weight you could remove [from the vehicle] the less battery you had to use for a given range. They came up with different solutions because no matter which of the many available options you choose, there’s always going to be an inflection point between range and cost that produced the best result for the customer.”

Lessons learned on the Ford GT led Theodore to the creation of the Uni-Chassis, which combines stressed front and rear structures with a backbone section to create a self-supporting rolling chassis.

Tesla pursued an aluminum-intensive design, while BMW created a hybrid architecture with an extruded aluminum chassis topped by a carbon fiber passenger cell. As Theodore intones, “That was not an inexpensive solution by any means.” Yet, had battery prices held relatively steady while regulatory demands for EVs increased, BMW might have been proven right, and followed its initial entries with ones that kept the hybrid architecture while whittling away at production costs. Tesla, on the other hand, had a two-way bet. In the first, any switch to aluminum-intensive structures by major automakers would help drive its costs down by increasing supply. Or, as has happened, falling prices and tweaks to the battery and electronic control systems would make weight less of a concern, and allow a shift to a mixed-materials or all-steel unit body, especially in vehicles designed to be more affordable. But they weren’t the only ones who made major bets on different architectures and materials.

“Material migration is based on the price structure of the vehicle,” says Theodore. “Ford made a bold move when it shifted the F-150 to aluminum, but it made the shift in steps.” As a body-on-frame vehicle, the F-150 could rely on the steel frame underneath to help carry the load, both in terms of cost and cargo. It also allowed engineers to learn about how the material reacted in real-world situations, and use this knowledge to further refine utilization of the material in the Ford Expedition and Lincoln Navigator. Eventually, Ford will be able to take the next step, building an aluminum-intensive unit body, should the need arise.

GM, on the other hand, took a different approach. “GM was about to follow Ford with an aluminum-intensive pickup,” says Theodore, “when it decided to pursue a mixed-material strategy, based on the belief that there’s no one material that’s best for each application.” Despite being more conventional in terms of the materials used, learning how to join a blend of optimized materials carried its own risks. However, teething problems eventually gave way to successful implementation.

“These are big risks, billion-dollar bets each and every time you make a decision,” says Theodore. “Also, there aren’t that many vehicle architectures around [on which to experiment].” Many of the holistic architectures don’t work out as planned because the parameters change, and that can lead a company to trip and even fall. “That makes it even more of a challenge to choose a direction, and why it’s not a bad idea to take an incremental approach to the problem toward reaching the endgame. What you really have to do,” he says, “is have an overall plan where every incremental move takes you closer to the endgame, but if you follow whatever the whim is each day—carbon fiber today, aluminum tomorrow, three-millimeter stainless steel the day after that—you’re never going to get to your goal.”

The Weight of Tech

In the short term, Theodore expects vehicle weight to rise as the combination of tighter safety standards, electrification, increased equipment levels, and the drive toward autonomous vehicles converge. “The industry has a ton of money bet on electrification and autonomy,” he says, “yet they’re also trying to reduce weight while putting on more sensors that increase electrical load and require more power, all of which drives up vehicle weight and cost.” Eventually, Theodore surmises, the industry will have to decide what form the vehicle of the future will take, as it realizes it has been thinking too far ahead of the customer and the technology. “By 2050,” he says, “this is all going to change. I predict that’s when the government will decide to ban human-driven cars from public roads. When you get to that point—if the lawyers and safety advocates allow it—there’s a lot of stuff you can peel off because each car will talk to each other and won’t crash. Plus, geofencing will prevent pedestrians from walking into the road, making the driving task trivial and all of the sensors and software currently under development redundant.” Under that admittedly bleak but safe scenario, Theodore envisions Tupperware-like structures sitting atop common EV platforms, each personalized via 3-D printed customized body panels.

Yet, if the auto industry has rushed headlong toward autonomy and the weight increases it brings, it has been forced into building EVs by governments and NGOs convinced an electrified auto industry is the only answer to environmental concerns. “Let’s be honest. Automakers are being forced to produce electric cars, and nobody—nobody—is making any money on them,” claims Theodore. “It’s getting better as the [battery] costs come down and the volumes increase, but neither the demand nor the costs are where they need to be, which causes many to worry that the various governments are doing what they did with diesel: subsidizing it until it implodes!” That fear adds to corporate anxiety and almost guarantees OEMs will take a conservative approach that balances every gram of excess weight against cost as it chases acceptable driving range. Especially when, as in the diesel example, the market could make an unexpected seismic shift.

So what’s the answer? According to Theodore: “You have to reinvent the important stuff and carry over as much of the stuff that’s proven. We learned that lesson from Toyota. They think things through for a long time before they execute and have a long-range view of how they are going to migrate to something.” In other words, it’s not the materials, procedures or processes, it’s all of those things pointing down a path to where you believe your endgame is going to be.

A Holistic Approach to EV Lightweighting

Williams Advanced Engineering’s FW-EVX scalable EV platform is designed for C- and D-class vehicles, and features A-arm suspension at each corner, the ability to integrate up to four motors, the option of a 4wd transmission, and more. A typical C-class application with steering unit and 772-lb. 80-kWh battery pack weighs 2,105 lb.

As if proof was needed of William’s F1 roots, the FW-EVX side rails provide controlled crush zones, channel air from aerodynamically optimized ducts at the front of the vehicle through internal radiators to cool the batteries, sends the spent cooling air through a diffuser to create downforce, mounts the batteries to an aluminum baseplate that bolts directly to the thermally conductive vehicle floor to eliminate the need for discrete cooling systems, and monitors the temperature of the heat sink and the cooling air (among other parameters) to infer peak cell temperature. 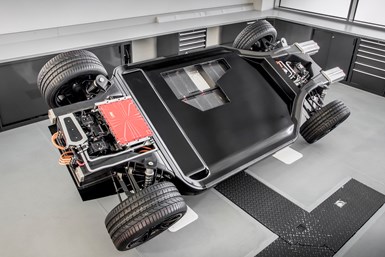 The central battery module is built via a highly automated process that scribes engineered hinges into a single composite preform. The sections are folded along these lines to create a box to hold the battery cells. These are bonded together to form 3D modules that provide individual location and securing points for the cells, which increases their longevity and improves the platform’s stiffness and NVH performance.

Not to be outdone, the platform uses William’s Advance Engineering’s “Racetrak” process to form the suspension A-arms. This comprises press-forming the wishbones from 80% recycled carbon composites in a 90-second process. It claims the parts are 40% lighter than a conventional aluminum design, with cost comparable to those made from aluminum forgings. — CAS