Volkswagen Group is on record indicating that it will be launching at least 30 battery electric vehicles (EVs) by 2025, which is not all that far away by any reckoning.

So far as the Volkswagen brand, goes, the vehicles will look like these, the I.D. CROZZ crossover and the I.D. BUZZ minivan: 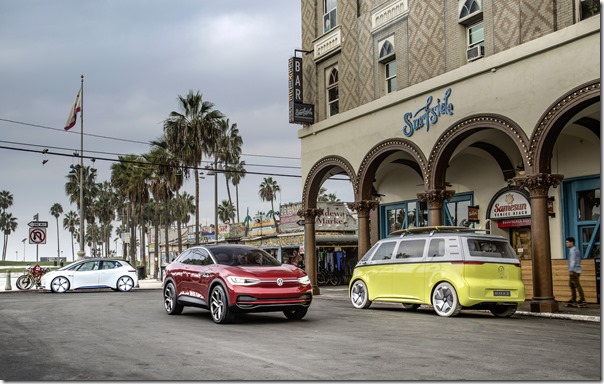 While crossovers are the architecture of choice nowadays and the I.D. BUZZ minivan is parsecs away from the Routan, the Chrysler-based minivan that VW had on offer for five years, Volkswagen is probably not doing itself any favors—assuming that it is vehicles like those that it is going to be putting on the market—with this, the Volkswagen I.D. R Pikes Peak: 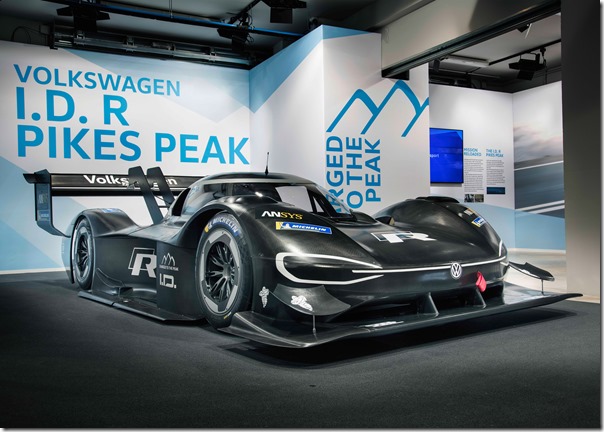 Yes, this is a special, one-off vehicle that the company is going to be bringing to Colorado for the June 24 “Race to the Clouds” at Pikes Peak.

The vehicle—which is based on a carbon-fiber monocoque with a steel roll cage—features two electric motors that will generate 500 kW (a.k.a., 680 hp). Including the driver (the defending champion, Romain Dumas) the mass is less than 2,420 pounds.

The I.D. R Pikes Peak utilizes lithium-ion batteries. Unlike the batteries that will be used in, say, the I.D. CROZZ, these batteries are setup so as to provide the highest-possible power output in the run of 12.42 miles that includes 156 turns as the vehicles charge up from the start line at 9,390 feet to the finish at 14,110 feet. Volkswagen engineers calculate that through the amount of braking that will be done (the vehicle can go from 0 to 62 mph in 2.25 seconds, so braking in order to negotiate turns that make hairpins look like widely sloped transitions) the regenerative system will produce about 20 percent of the electric energy the vehicle needs.

An interesting point that Volkswagen makes about an electric vehicle on the course versus on that is powered with a gasoline engine: given the altitude that the race starts at, which means reduced air pressure, the engine operates at 71 percent of capacity. By the time it reaches the finish line at 14,110 feet, the engine is operating at just 57 percent.

The electric vehicle? One-hundred percent, all the way.

(Incidentally: were Volkswagen to put something resembling the I.D. R Pikes Peak on the road, how long would it before people stopped obsessing about a certain company based in Palo Alto?)