China is an Important Market for VW

There are 12,156 parking spaces at the Walt Disney World Magic Kingdom in Florida, according to the wdwmagic.com website, which means that were you to park all of the Volkswagen vehicles that were sold in China in 1985 you would have 10,156 empty parking spaces.

Just to get a sense of how things are accelerating in the world’s largest automobile market, know that in 1992 the cumulative car count from VW was 100,000 units. By ’97 there were in excess of one-million. 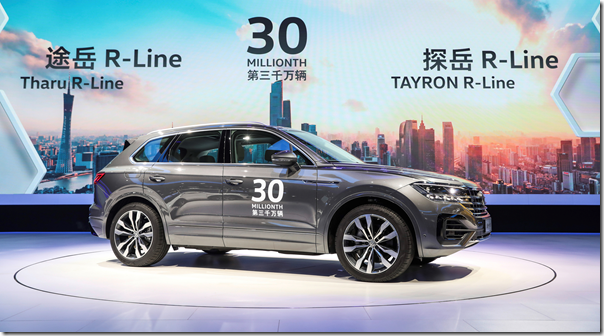 Yesterday, at Auto Guangzhou 2018, Stephan Wöllenstein, CEO of Volkswagen Brand China, said, “We reached a fantastic milestone this November, as we delivered the 30 millionth Volkswagen – a Touareg – to a customer in China. And to remain the number one choice for Chinese car buyers, as we have been for many years, our product offensive will continue in 2019.”

(Last year in the U.S. Volkswagen sold 484 Touaregs. The Touareg is highly relevant in China; not in the U.S.)

According to Wöllenstein, Volkswagen is going to be providing even more electric and electrified vehicles in the China market next year to address the “New Energy Vehicle” (NEV) mandate of the Chinese government: “Together with our joint venture, we also will step up our efforts with our NEV offensive in 2019—introducing three locally produced battery-electric versions of well—known Volkswagen models. We will also introduce on more locally produced PHEV and the Touareg PHEV from Volkswagen Import.”

Number of electric Volkswagens available on the U.S. market right now? One. The e-Golf.

Yes, the China market is that important.