Although Volkswagen is getting enthusiastically electric, there is still a cadre—eight departments with around 220 employees in Wolfsburg—who are committed to the “R,” the company’s premium performance brand.

And coming soon(ish)—late next year as a 2022 MY vehicle—is the next Golf R, the fifth generation of the performance hatch, this one based on the Golf Mk VIII. 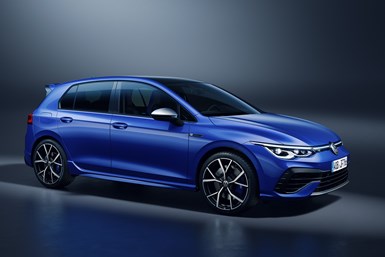 The vehicle, which has permanent all-wheel drive, 4Motion, is powered by a 2.0-liter turbocharged four-cylinder engine that produces 315 hp and 310 lb-ft of torque. Compared to the last-generation R, this is a horsepower increase of 27 and a torque boost of 300 lb-ft.

The standard transmission is a six-speed manual. An optional seven-speed DSG dual-clutch is available.

While other VWs have the 4Motion AWD system, it isn’t like that of the new R. That is, while in other vehicles the drive system transfers the power in a 50:50 ratio to the left- and right-hand rear wheels, for the R the system offers torque vectoring so that the torque is distributed variably, with 100% going to the wheel on the outside of a bend so that understeer can be eliminated.

And on the subject of steering, the vehicle has variable-ratio steering: power distribution is determined by the steering angle, accelerator pedal position, lateral acceleration, yaw rate, and speed.

Compared with the conventional Golf Mk VIII, the vehicle is lowered by 0.8 inches. The front suspension is a McPherson strut style with a multi-link setup in the rear. There is an aluminum subframe in the front that reduces vehicle mass by 6.6 pounds. Inside the new Golf R.

The spring rates and anti-roll bar rates are both increased by 10% compared with the previous model.

There are some cosmetic changes, such as the aforementioned calipers being painted blue with the R-logo. There are 19-inch alloys. The front bumper has a splitter and R-styled intake grilles. At the top of the radiator grille there is a blue crossbar that is an LED strip: when the engine starts the LED is illuminated and it serves as DRLs for the vehicle.

There is a functional roof spoiler. The rear bumper features a gloss-black diffuser that is accented by the chrome twin tailpipes on each side.

A key feature is the Vehicle Dynamics Manager, which integrates the electronic differential locks, the DCC adaptive damping system and the 4Motion system. The Vehicle Dynamics Manager (1) adapts individual wheel damping at a rate of 200 times per second; (2) provides exact clutch control so there is optimal wheel torque; (3) provides targeted braking intervention; (4) biases wheel torque to the rear; (5) monitors the handling on every corner to correct any understeer or oversteer.

He ought to know. He took the vehicle on the Nürburgring Nordschleife in 7 minutes, 51 seconds. The previous Golf R: 8 minutes, 10 seconds.