Last week Volkswagen announced two low numbers, one of which is actually really quite impressive. It is not 27,112, the number of vehicles that Volkswagen of America delivered in April, which is down 9.65 percent compared to April 2015, and let’s face it: the pre-diesel debacle sales of 30,009 in April 2015 wasn’t exactly stellar.

No, the lower number of interest is 7:49.21. That’s the time that a Golf GTI Clubsport S required to rip around the Nürburgring Nordschleife, setting a new record for front-drive production cars. 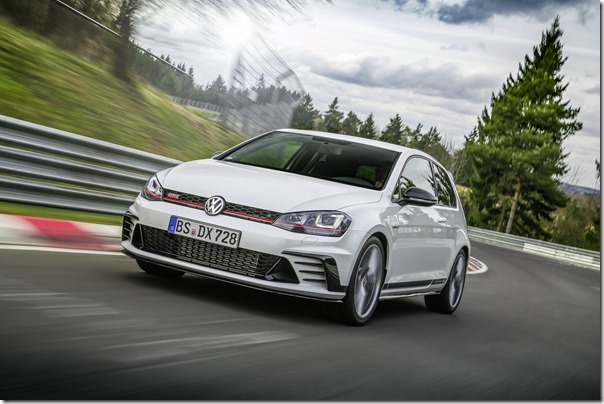 (And to be fair to Honda, it is worth noting that in April it delivered 35,331 Civics in the U.S., more than the entire number of VWs.)

The idea to develop the limited edition car—there will be just 400 built for the global market—came after the development of the conventional GTI. Of that car, Karsten Schebsdat, head of Chassis Tuning, said, “It was obvious to all of us that this GTI had immense potential, so we decided to get the most performance possible out of this car. A small team went through the entire process, from bottom to top, pretty much like it was back when the first Golf GTI came into being.”

One of the things that team did was create a lighter car by doing such things as getting rid of the rear seats and the central arm rest. They installed a smaller battery. They ripped out the insulation. They removed the variable-height trunk floor, the rear parcel shelf, and the floor mats.

They installed a light aluminum subframe for the front suspension and aluminum brake covers. But the use of 235/35 ZR Michelins on19-inch “Pretoria” aluminum-alloy wheels, Dynamic Chassis Control (DCC), a strut brace, a partition net behind the seats and carpet in the rear added mass.

Overall, the weight down is 66 pounds compared to a Golf GTI Clubsport. The S model has an unladened weight of 2,833 pounds.

Take that and realize that the engine—which is essentially based on the 2.0-liter four found in regular GTIs—produces 307 hp and 280 lb-ft of torque at from 1,700 to 5,000 rpm, and you can understand why the GTI Clubsport S, which has a top speed of 162 mph and a 0 to 62 mph time of 5.8 seconds, was so masterful on the track in Germany.

(Of course, they had to do a number of other things, such as modify the ESC software and utilize a special sport chassis. But still. . . .)

Sometimes when automakers announce low numbers it is for something they can be proud of. And VW can.