Here is one of the signs that the car business is more international than some politicians might imagine: The 2018 Japan Car of the Year is the Volvo XC60.
#Lexus #supplier #Honda

Here is one of the signs that the car business is more international than some politicians might imagine: 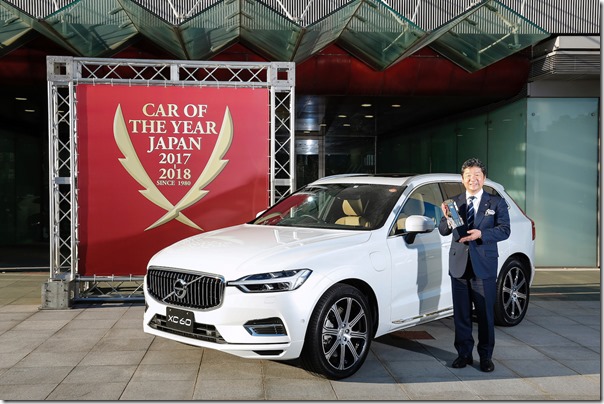 Volvo is a Swedish brand. It is owned by Zhejiang Geely Holding Group. That’s a Chinese company.

What’s even more surprising is the second-place finisher: the BMW 5-Series.

The distance from Munich to Tokyo is 5,800 miles.

OK. The third-place prize went to Toyota for the new Camry.

Which means that the XC60 did very well, indeed, in the Japan Car of the Year awards.

(It is worth mentioning, however, that Toyota didn’t go back to greater Nagoya with just a bronze. It received a trophy for Best Innovation, for the plug-in version of the Prius. And the Prius also garnered a Special Achievement Award, as Toyota has sold 10 million of the hybrids since it was introduced 20 years ago. (And just to show you that good engineers can prosper: Takeshi Uchiyamada, Toyota executive chairman, who picked up the trophy, was the chief engineer of the first-gen Prius.) Finally, it received the Emotional Award for the Lexus LC.)

(And as I am a juror for the North American International Car and Truck of the Year Awards, I would be remiss if I didn’t note that the Volvo XC60 is a finalist in the Utility category (along with the Honda Odyssey and the Alfa Romeo Stelvio) and the Camry is a finalist in the Car category (along with the Honda Accord and Kia Stinger). The third category, Truck, is where the traditional American brands come to the fore, as the finalists are the Chevrolet Colorado ZR2, the Ford Expedition and the Lincoln Navigator. The winners of these awards will be announced January 15, 2018, at the North American International Auto Show. Bridgestone Americas is the presenting sponsor of NACTOY.).