One of the trends that is expected to occur as a result of autonomous vehicle development is that OEMs will not just be equipment providers, but service providers, as well.
#Volvo rucks #oem #Volvo

One of the trends that is expected to occur as a result of autonomous vehicle development is that OEMs will not just be equipment providers, but service providers, as well. For example, it is easy to imagine GM Cruise Automation offering a competitive service to Lyft and Uber based on the automated vehicle that it developing. There are at least a couple of benefits to this approach, including (1) revenue from providing rides and (2) more data resulting from those rides, which can be used to improve overall operations.

This, in a way, is in the process of being realized, not in the streets of San Francisco, but a limestone mine in Norway.

Volvo Trucks is working with Brønnøy Kalk AS, a Norwegian calcium carbonate supplier, at one of the firm’s mines. 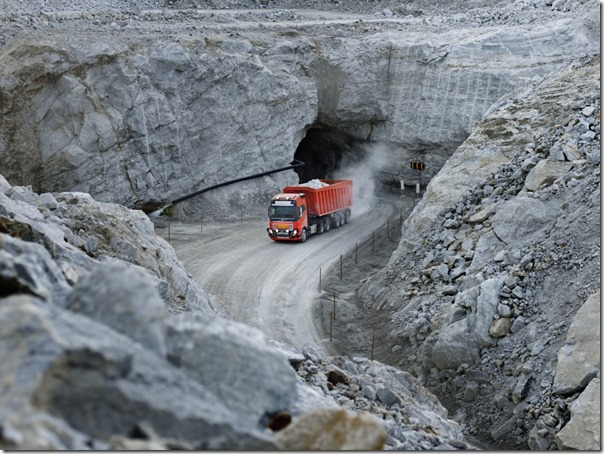 There, five autonomous Volvo FH trucks will operate (they’re running now, with full deployment in 2019) on a five-kilometer route between the mine and a rock crusher.

Rather than buying the trucks from Volvo, Brønnøy Kalk is buying the transport service, with the price being based on the tons of material delivered.

While not revealing details of the autonomous systems being deployed, Volvo Trucks acknowledges that there are extensive sensor arrays on the FH trucks, including cameras, lidars and radars.

So Volvo Trucks is getting both (1) and (2) indicated above.

As for (2), Sasko Cuklev, director of Autonomous Solutions at Volvo Trucks, said, “By working in a confined area on a predetermined route, we can find out how to get the best out of the solution and tailor it according to specific customer needs. This is all about collaborating to develop new solutions, providing greater flexibility and efficiency as well as increased productivity.”