Audi, not all that long ago, was pushing the utilization of aluminum in a massive way, pioneering the ways and means to deploy the light material in structural and closure applications. But as time went on, the folks in Ingolstadt came to the realization that a mixed-materials approach to vehicle build is more advantageous, so that’s the route they’re now taking.

So it is interesting to note that the rear wall structure that’s used for the new Audi A8 is made of a carbon fiber reinforced plastic and that this component has just received the JEC Innovation Award in the Automotive Process Category: JEC Group, incidentally, is the largest composites organization in the world, so there’s some significant street cred with this honor. 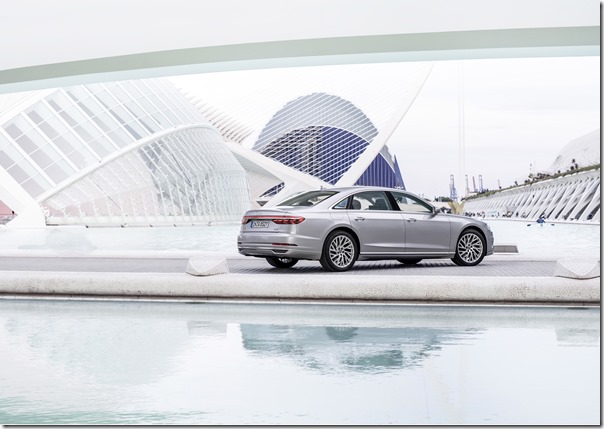 The component in question was developed by Audi in collaboration with Voith Composites GmbH, The Dow Chemical Company, and ZOLTEK Corp. As the name of the award indicates, this is not significant just because of the development of the rear wall—and it should be pointed out that t weighs 50 percent less than the part in replaces and has increased torsional rigidity of some 24 percent, which makes the high-end sedan quieter, safer and better-handling—but because the process the four developed allows the fully automated production of more than 300 parts per day.

There are two Dow materials used for the production process: VORAFORCE epoxy resin, which is injected into a carbon fiber preform through a resin transfer molding process; it has a cure time of less than 120 seconds. BETAFORCE composite bonding adhesives, which are used for a variety of applications, including mounting the component into the body structure.

Martin Reimers, composites market manager at Dow said, “For the first time, the full potential of CFRP can be used in high-volume production tanks to innovative and cost-efficient production technologies.”

While 300 parts per day may be good for CFRP, taken in the context of metal panels—aluminum, for example—that isn’t exactly “high production.”

Still, it advances the utilization of different materials, so congratulations to all involved.