Yes, it is highly aerodynamic. And for a car with 177 hp, fast. But not exactly the stuff of daily driving.
#Volkswagen #tech #Carbon

Volkswagen engineers back in the 1980s wanted to see the effects of aero and mass on vehicle performance. Especially aero. Just look at this, the Aerodynamic Research Volkswagen (ARVW):

This is the ARVW, a study in aerodynamics by Volkswagen. (Images: VW)

There is an aluminum frame below the fiberglass and carbon-fiber composite skin.

Located behind the driver is a 2.4-liter turbocharged inline six that produces 177 hp. A chain drive powers the rear wheels. 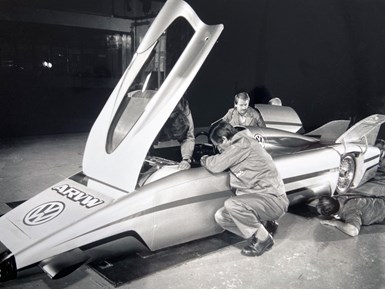 One wonders: would a chiropractor be part of the development team?

There is a water tank that provided the fluid injected into the turbocharger intake. The primary engine cooling vent is in the nose and the air was expelled over the top of the vehicle.

The wheels are covered. The underbody is smooth. And there are moveable fins to help provide stability at speed.

The coefficient of drag of the ARVW is just 0.15.

A team of VW engineers and a professional driver went to the Nardo test track in Italy. It was October 1980. The car hit 221 mph during its first hour on the track.

They were able to get it up to a record-setting 225 mph.

The design of the ARVW was influential for that of the VW XL1, a limited-run production car (yes, a real car: I actually drove one in Wolfsburg, perhaps the one in this picture) that was rated at 261 mpg.

Although the ARVW is certainly quick, it probably isn’t particularly comfortable.