When the population of a city that you may not even have heard of has 8 million people, odds are good that what’s thought regarding the viability of EVs may not be the case.
#Volkswagen #JAC #oem

The U.S. has one city with a population of greater than 8 million: New York. LA, Chicago, etc. don’t even come close.

Which brings us to the city of Hefei, the capital of the Anhui province in China. It has a population of about 8 million people. (Hefei is almost due west of Shanghai by about 290 miles.)

Volkswagen Group China, SEAT (one of the Volkswagen Group companies, based in Martorell, Spain), and China-based auto manufacturer JAC have signed an agreement to form a joint venture company, JAC Volkswagen, which will be headquartered in Hefei. 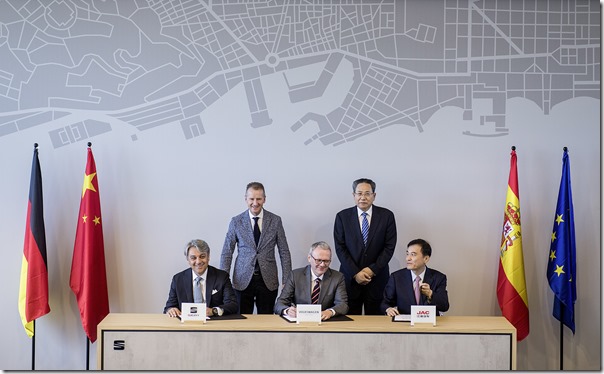 Signing the agreement for the Volkswagen-JAC joint venture.

An objective of this joint venture is to help move SEAT into the China market, with a particular focus on electric vehicles (EVs), which is something that Volkswagen Group is taking very seriously, as it anticipates that by 2028, more than half of the 22 million EVs it plans on building will be coming out of factories in China.

On the subject of the agreement, Luca de Meo, CEO of SEAT, said, “The signing of this agreement is a new step forward in the strategic plan for the globalization of SEAT. With the introduction of our business in China, we are boosting the future of the company and of electric mobility at the same time. Today, China is the benchmark country for electric vehicles. We aim to be a part of this ecosystem in order to exchange knowledge and make progress in achieving global mobility that is more sustainable."

The joint venture company will also work on the development of a new platform for small EVs.

The companies also entered into an agreement with the city government and other agencies to develop “smart mobility solutions” for Hefei, which will include the development of things including autonomous ride hailing services.

While there are a lot of EV skeptics in the U.S., when there are cities with a population like that of Hefei that are showing a keen interest in electric tech, even if EVs don’t play in Peoria (population: 116,000), it may not matter.