“A complete vehicle will probably not be manufactured by a 3D printer any time soon, but the number and size of parts from the 3D printer will increase significantly,” according to Dr. Martin Goede, head of Technology and Planning and Development, Volkswagen.
#oem #HP #GKN

“A complete vehicle will probably not be manufactured by a 3D printer any time soon, but the number and size of parts from the 3D printer will increase significantly,” according to Dr. Martin Goede, head of Technology and Planning and Development, Volkswagen.

He added, however, “Our goal is to integrate printed structural parts into the next generation of vehicles as quickly as possible. In the long term, we expect a continuous increase in unit numbers, part sizes and technical requirements – right up to soccer [ball]-size parts of over 100,000 units per year.” 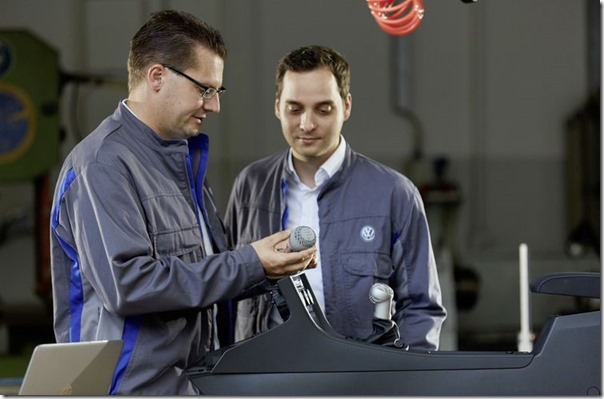 To that end, Volkswagen is working with HP and GKN Powder Metallurgy, deploying a new 3D printing process launched by HP today at IMTS in Chicago, “HP Metal Jet.”

The Metal Jet system is said to have a productivity improvement of as much as 50 times that of conventional 3D printing processes, thereby making it ready for production applications.

One of the advantages of the 3D printing approach compared with conventional manufacturing processes is that parts can be manufactured without the need for tooling to be fabricated, a process that is both time consuming and expensive.

The HP Jet process produces parts layer-by-layer with a powder and binder. The part is then sintered (i.e., baked) to harden it into the solid structure. Other 3D processes tend to melt the material with a laser.

Although Dr. Goede anticipates the production of larger parts (a soccer ball is about 25 inches in circumference), the vehicle manufacturer is going to start small producing things like individualized tailgate lettering and special knobs.

This actually has a market reason beyond the technical novelty. Goede: “Automotive production is facing major challenges: Our customers are increasingly expecting more personalization options. At the same time, complexity is increasing with the number of new models. That’s why we are relying on state-of-the-art technologies to ensure smooth and fast production. 3D printing plays a particularly important role in manufacturing of individual parts.”

Going forward, plans call for GKN Powder Metallurgy to establish a supply chain with Volkswagen for the production of parts, with an objective of having structural components—not just things like knobs—to be 3D printed for mass production cars in two to three years.