Weighing in on Composites

Continental Structural Plastics aims to grow its sales from about $900 million last year to $1.5 billion by 2025.
#Ford #Toyota #Carbon

Continental Structural Plastics aims to grow its sales from about $900 million last year to $1.5 billion by 2025.

That’s an ambitious target. Especially for a company that specializes in niche materials: carbon fiber and reinforced-plastic composites.

“We have a small slice of the materials pie,” says Mike Siwajek, who heads CSP’s research and development efforts. But Siwajek sees plenty of opportunities. That is, after all, his job. Pointing to lightweighting, noise/vibration/harshness (NVH), design, and performance benefits, Siwajek envisions new applications for these materials for everything from underbody and interior components to Class A body panels, pickup boxes and electric vehicle battery cases.

Process improvements are starting to make composites viable on higher volume (relatively speaking) vehicle programs. Whereas tooling costs previously limited the material to production runs of about 25,000 units, some recent programs—such as the pickup box on the Toyota Tacoma—have topped 100,000 to 200,000 vehicles.

CSP is presently supplying the carbon fiber pickup bed for the GMC Sierra. In this application there is a 62-lb weight save compared with steel.

In the “high profile” category: CSP has supplied the body panels for the Corvette for decades—including the sheet-metal-compound (SMC) panels on the 2020 C8 model.

Another recent application is the composite engine shroud on the 2020 Ford Explorer SUV. Billed as the first such application in the industry, the dual-wall design is made from an SMC thermoset plastic. The four-piece assembly weighs 12 lb., which CSP says is lighter and allows for more design flexibility than stamped-steel covers. Other benefits: 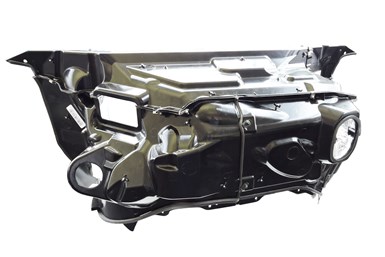 Developed with Ford at the carmaker’s NVH lab in Dearborn, Mich., the SMC cover creates an air gap between the engine compartment and the steel front bulkhead by wrapping around the back of the engine and connecting to the strut towers on each side of the engine bay. The strength of the composite’s glass-fiber reinforcement enables the material to be molded thin enough to fit in such a tight space.

“It’s a good example of combining the assembly of multiple parts into one composite molding that meets demanding underhood performance and packaging requirements,” Siwajek notes.

Electric vehicles provide new lightweighting opportunities for all materials, as carmakers try to offset the added weight of batteries and motors. Battery cases and trays are one of the biggest application areas.

CSP has experience in this area, having provided composite covers for the Chevrolet Volt plug-in hybrid and Spark EV, with the component for the Spark EV being an integrated cover and tray (both models have since been discontinued).

According to Siwajek the integrated approach is advantageous because it allows CSP to add value by further reducing weight and overall system complexity. Of the two components, the tray is more challenging because it acts as a structural component in skateboard-type EV architectures, which he says may require additional glass or fiber reinforcement.

One concern with EVs is fire, generally caused by damage to the battery that causes a short that can ignite chemicals in the battery. Siwajek says fire-resistant properties to be injected directly into a material instead of requiring an intumescent coating.