On the evening of March 18, 2018, a woman in Tempe, Arizona, was walking a bicycle across a four-lane road when she was struck by an Uber test vehicle that was operating in an autonomous mode. She died of the injuries. It was the first fatality of a pedestrian caused by an autonomous vehicle. (There was a safety driver behind the wheel of the Volvo XC90.)

The reports of accidents happening in relation to Tesla Autopilot—including fatal accidents—are the stuff that draws more attention than seemingly accidents of any other type. In the case of two fatalities in Teslas, the National Transportation Safety Board (NTSB) ran investigations and concluded that the system per se wasn’t the cause. While people, apparently, think that Autopilot is a self-driving system, it isn’t.

Events like those are of concern to the member companies of Partners for Automated Vehicle Education—OEMs, service providers, academics, suppliers—because PAVE is predicated, in large part, on the proposition: “Automated vehicles have potential to bring greater safety, mobility and sustainability to our roads.”

So this means that if people know about accidents that automated vehicles (AVs) are involved with, they may be less than enthusiastic about AVs than they otherwise might be, which could result in reduced proliferation of the tech, which would put a damper on that potential. 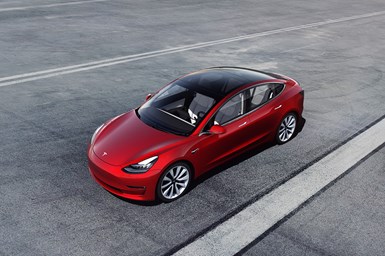 The Tesla Model 3. The Autopilot system is something that garners all manner of attention—but apparently by industry watchers more than ordinary people. (Image: Tesla)

So PAVE asked people about their perceptions of the specific Uber accident as well as the Tesla incidents in general.

And as Ed Niedermeyer, director of Communications for PAVE, explains on this edition of “Autoline After Hours,” it turns out that so far as the 1,200 surveyed are concerned, they really aren’t all that concerned.

That is, 51% responded that they know “nothing at all” about the Tempe accident and 37% say they know “a little.”

So that’s not necessarily going to put people off of AVs.

More About Tesla, Of Course

Niedermeyer talks about these and other findings found in the recently released PAVE survey with Autoline’s John McElroy; Tony Quiroga, deputy editor, Reviews, Car and Driver; and me on the show.

Niedermeyer also happens to be the author of a book that was published last Fall titled Ludicrous: The Unvarnished Story of Tesla Motors, so the subject of Elon Musk, seemingly always a popular one, is discussed on the show.

In addition to which, we talk about the effects of COVID-19 on a variety of other subjects, ranging from whether people are going to want to be able to buy vehicles without dealing with the travails associated with a dealership to racing without spectators.

And you can be a spectator of the show right here.