What Does Jeep Tell Us About the Market?

Forget Tesla-killers. Ford is going after Jeep with the Bronco. This could be epic. Or not.
#Amazon #Toyota #Buick

Although looking at Q2 2020’s unprecedentedly bad sales numbers probably isn’t all that telling of what reality will be like if—and let’s fervently hope when—there is a vaccine, it could provide some sense—fun-house-mirror-like though it may be—of the market.

In Q2 Jeep Brand’s sales were down overall by 27%. 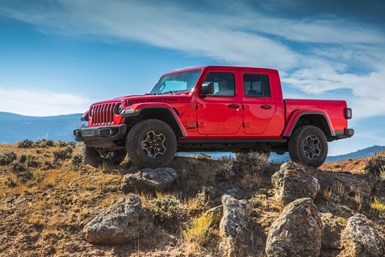 The Jeep Gladiator has climbed even in this tough sales environment. (Image: FCA)

There was one blindingly bright spot: Gladiator.

To be fair, however, it should be pointed out that the Gladiator didn’t arrive at showrooms until the spring of 2019, so last year’s sales, perhaps, are not a really good marker of current tastes and interests.

But that 174% number is still nothing to be sniffed at because it is directionally correct.

Jeep pretty much has the serious sport utility segment (taking things like Land Rovers out of consideration) to itself, with only off-road variants of existing models (e.g., Colorado and F-150) from cross-town rivals being competitive, and in those cases, only in a minor way as these aren’t what those models are built on.

Yes, yes, this is an atypical year.

But it is still an apples-to-apples comparison because FCA and GM both faced COVID-19 disruptions to their businesses.

Given the comparatively huge Jeep numbers, it is somewhat surprising that GM and Ford have allowed their neighbor to the north to dominate that segment with little in the way of competitors.

Something that officially changes today, with Ford’s introduction of the Bronco. There are the Bronco two-door, Bronco four-door model and a smaller version, the Bronco Sport. Ford boasts that this lineup “will be the only domestic brand of SUVs with standard 4x4.”

Ford isn’t just creating a lineup of vehicles. It is developing a brand.

Clearly we know what the folks in Dearborn are taking direct aim at.

What’s more, Ford isn’t just positioning Bronco as a product. It is positioning it as an “experience.” This ranges from the creation of “Bronco Off-Roadeos” to selling “gifts, novelties, collectibles and apparel” on Amazon. 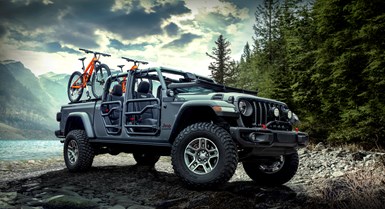 When the Gladiator launched, Mopar had over 200 pieces of equipment to make it even more capable. (Image: FCA)

Jeep, of course, has done exceedingly well with Jeep Jamborees, which go back to 1953 when a Jeep enthusiast created a trip across the Rubicon Trail. In 1954, the corporation (at the time Willys) got involved and the Jamborees have been running since.

And while there is an array of Jeep-related licensed things that one can buy from T-shirts to baby strollers, it should be noted that when Jeep was launching the Gladiator it announced that sister-organization, Mopar, had developed over 200 accessories for the vehicle, including lift kits, tube doors and other engineered elements. Not swag.

Although the existence of the Bronco lineup became official today (July 6), it won’t be unveiled until July 13—via an activation with Disney: yes, this is meant to be experiential.

So will Bronco sell?

Will it sell because it is a Ford and people are confident that Ford builds superlative trucks?

Will people, post C-19, be looking for more adventures, as the bucket-list has become something all-too-real for people?

Will people buy Broncos with standard 4x4 and not take them on terrain more challenging than Michigan potholes?

Of course—and even getting it dirty is a dubious proposition.

Will Bronco knock Jeep off its position on the top of that mountain?

Unless something goes horribly wrong with the probable FCA-PSA merger, it is hard to imagine that the brand that is synonymous with “go anywhere, do anything” will falter.

A personal side note:

Jim Farley, Ford chief operating officer, is quoted as saying, “Like the original, the all-new Bronco family is engineered to take you to epic places, with capability to deliver confidence on any type of terrain.”

In late 2005 I happened to be at an event with Jim Farley. He didn’t work for Ford at the time. He was vice president of Marketing for Toyota Motor Sales at the time.

Toyota is known for building vehicles that can take it. The November 2003 Top Gear episode when Jeremy Clarkson tried to kill a HiLux through all manner of extreme moves is one of the most all-time memorable episodes.

Why was I with Jim Farley back then? To drive the Toyota FJ Cruiser. He pretty much told me that it could go to epic places and deliver confidence on any terrain. And in my limited experience, it did. 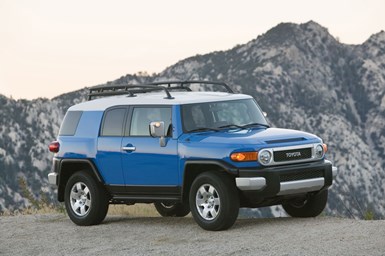 It seemed like a sure thing at the time.