What GM and Ventec Working Together Means

Perhaps you or someone you know has respiratory problems and needs to travel with equipment that can help you breathe. 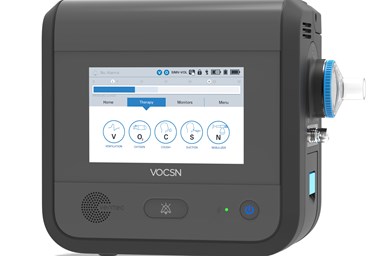 Ventec VOCSN critical care device will be produced at the GM facility in Kokomo, Indiana, as the medical equipment manufacturer and OEM work together to address the COVID-19 pandemic. (Image: Ventec)

Or there is the VOCSN from Ventec Life Systems, a single 18-lb. device that does what the combined 55 lb. of other equipment does.

The VOCSN—as in ventilator, oxygen, cough, suction, nebulization—was FDA approved in 2017, so this is arguably state-of-the-art equipment. What’s more, it is something that is absolutely essential to deal with the effects of COVID-19, which attacks the respiratory system. So there is a critical need for more of them—sooner, rather than later.

Ventec is the company that General Motworking with to increase production. And it has been working with Ventec since March 20, before it was “ordered” to do so.

This is a two-pronged approach. One is that GM manufacturing, engineering, purchasing, legal, and other teams have been working with Ventec to boost its production. 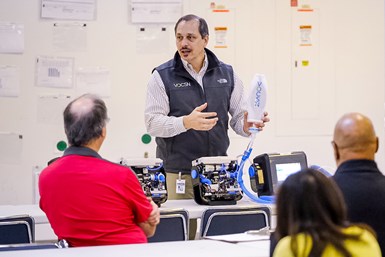 Second, the two companies are working together to transform a GM plant in Kokomo, Indiana, a plant that produces precision electrical components, so there is an existing knowledge base among the women and men who work in the factory, to one where they will manufacture VOCSN devices.

It is expected that they’ll start production in April and quickly ramp to 10,000 critical care ventilators per month and are putting in the infrastructure so they have more capacity if needed.

There are approximately 1,000 workers who are being deployed to make the devices; GM has been working with the UAW for securing the personnel.

Another important aspect of this—and this is something that can be easily overlooked—is that it isn’t simply a matter of having assembly capacity, but there must be components available. 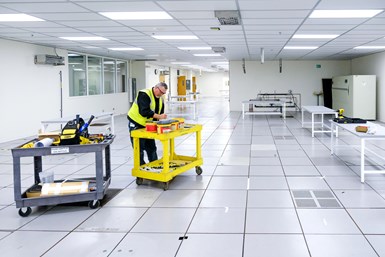 Work underway at the General Motors manufacturing facility in Kokomo to prepare it for the production of Ventec VOCSN critical care ventilators. (Photo by AJ Mast for General Motors)

So the Ventec and GM global supply base teams worked to develop the sourcing plans for the >700 parts that go into a VOCSN—and they’ve developed the sourcing for up to 200,000 critical care ventilators. Which is a monumental task, especially under prevailing conditions when many companies are finding their resources strained.

As GM CEO Mary Barra put it, “Our joint teams have moved mountains to find real solutions to save lives and fight the pandemic.”

Once upon a time places like Kokomo, Indiana, were thought to be right in the heart of the Rust Belt.

Detroit—as in the “Auto Industry”—was considered to be tired and played out, not in the least bit as interesting as what was going on some 2,000 miles west.

And here is another example of why what passes for the common wisdom is completely wrong.

Realize that this isn’t just about GM being able to make stuff at scale. It is about GM having (1) a sophisticated supply chain system, (2) advanced product and manufacturing engineers, (3) a highly skilled workforce and (4) the leadership that knows what to do before they’re asked to do it.