What Segment Does Reid Bigland Think Is Hot?

Former FCA exec knows his way around cars and trucks, and has identified a segment that can help the bottom lines of OEMs in a way some other vehicles don’t
#Ford #AlfaRomeo #people

With a 22-year career at FCA with positions that had him handling things ranging from Alfas to muscle cars—and with his last position being head of Ram Brand, U.S. Sales and FCA Canada, which he left in early April—Reid Bigland knows more than a little about the auto industry. 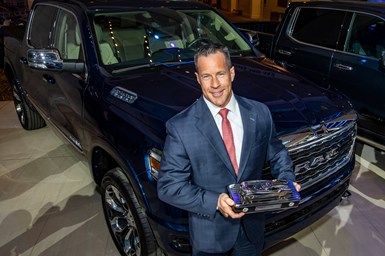 And in speaking in a webinar hosted by the Society of Automotive Analysts Bigland made an observation about a type of vehicle that is hugely profitable and has tremendous upside, a vehicle that otherwise gets very little attention.

After ticking off the usual suspects of profitability—light-duty pickups and full-size SUVs—Bigland noted that the “sleeper segment” is the cargo van segment.

Bigland pointed out that one consequence of the COVID-19 pandemic is that “home delivery demand has absolutely exploded,” which means fleets of cargo vans on residential streets across the land. Bigland thinks that cargo vans (this is a Ford Transit, for example) are a segment with ever-increasing sales opportunities. (Image: Ford)

In addition to which, Bigland said, there is the traditional cargo van buyer—various types of contractors—who is still in the market.

So Bigland suggested that OEMs with cargo vans—products like the Ford Transit and Ram ProMaster—are going to be doing well with those models.

He pointed out that the real issue when it comes to vehicles is their profitability not necessarily their overall sales volume.

For example, he noted that while there is still a non-trivial number of compact and midsize cars being sold, the profit potential for those vehicles is small compared with other types of models that an OEM has on offer—like pickups and SUVs (and cargo vans).

However, Bigland said that it is not always a case where SUV = $.

He pointed out that given the number of models in the segments, compact and midsize SUVs are becoming like cars in those same categories: not particularly profitable.

Bigland is fairly positive about the outlook for the industry for the third and fourth quarters based on the way the OEMs have reopened their facilities. He pointed out that the OEMs were in good financial shape going into the period of lockdown and that they did a good job of “battening down the hatches” to deal with the stoppages. That said, he pointed out that manufacturing facilities are high fixed-cost operations and so “all OEMs took on water” during the shutdown.

Still, their getting back into production as well as the government stimulus “that has kept the consumer in the game” will result in the OEMs coming out of this far better than was the case during the 2008-09 recession.