What You Need to Know About Batteries and Electric Vehicles

The opening sentence to the official history of the Southwest Research Institute is one of the best you’ll ever read about an outfit that now has some 3,000 people working in 10 states and three countries: “Thomas Baker Slick Jr.—an adventurer, philanthropist and oilman—founded SwRI on a South Texas ranch in 1947.” 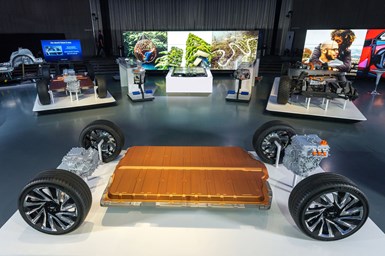 GM Ultium battery platform. GM is working on developing batteries that are efficient and long-lived while minimizing the use of rare earths. (Image: GM)

It was on a 1,200-acre cattle ranch outside of San Antonio, and even in its early days—despite San Antonio being nearly 1,500 miles away from Detroit—work done at SwRI included automotive testing, work that it continues to do. Among the areas of automotive research and development being performed there are software and electronics; vehicles, engines and drivelines; emissions; intelligent transportation systems; and batteries.

And on this edition of “Autoline After Hours” we are joined by Ian Smith, Manager-R&D, Electrified Powertrain, Automotive Propulsion Systems Department, at SwRI, who provides a deep-dive into what you need to know about automotive battery systems.

As he explains on the show, one of the big issues related to batteries is materials—not only the fact that some of them are rare earth materials and “rare” means “rare,” so there are efforts underway to minimize the amount of those materials because “rare” also tends to mean “expensive,” but that there are issues related to materials and those spectacular fires (a.k.a., “thermal runaways”) that are YouTube favorites when it comes to electric vehicles.

Smith and his team are doing extensive testing on batteries, looking at everything from safety to performance.

Everyone seems to be talking about fast-charging for batteries (let’s face it: pumping gas into a vehicle is a matter of a few minutes, not a lot of minutes, so OEMs are trying to find the ways and means to charge batteries more quickly so as to get over that hurdle vis-à-vis consumer acceptance). While people might like fast-charging batteries, the question is how do the batteries? According to Smith, they don’t.

While there also seems to be a full-electric future on the horizon, Smith says that the internal combustion engine has a good run ahead of it because, as he points out, oil has really good energy density, something that Thomas Baker Slick Jr. probably understood.

Smith talks with “Autoline’s” John McElroy, freelance writer John Voelcker and me on the show.

Then the three of us discuss a variety of other topics including the continued legal and financial issues that Volkswagen is dealing with related to “Dieselgate”—remember, in September this issue will be five-years publicly known—; May car sales, which, like the unemployment numbers released last week, were surprising better-than-expected; and (yes, again) Volkswagen making good on last year’s commitment to autonomous vehicle technology developer Argo AI and partner Ford on a $2.6-billion investment (in cash and in resources) in the company. And we also talk about statements made by the leaders of General Motors, Ford and FCA regarding the social racial inequality that was being called out across the U.S. as a result of the death of George Floyd.