C-V2X? That’s “cellular vehicle to everything.”

It a demonstration orchestrated at the 2019 CES, the vehicles were equipped with the Qualcomm 9150 C-V2X chipset. Then the vehicles cooperatively negotiated the right of way in a four-way, non-signaled intersection.

And “everything” doesn’t just mean other vehicles. People, too. Pedestrians and bicyclists tend to carry smart devices, so were those to be linked into the system, it would be possible for vehicles to detect where they are in space. 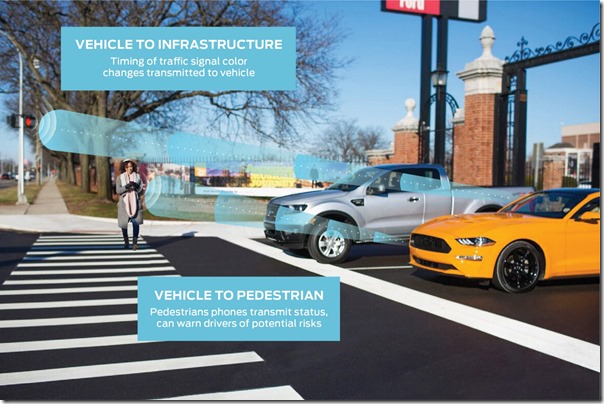 As Ford’s Don Butler, executive director, Connected Vehicle Platform and Product, put it, “Imagine a person suddenly steps into the street from out of view and your vehicle stops because it was alerted by that person’s smartphone. This is just one example of how C-V2X can connect smart vehicles to a smart world.”

In addition to which, the roadway infrastructure can be outfitted with the equipment to provide information to drivers.

Ford has announced that every model it releases will have conventional cellular connectivity by the end of 2019. And Ford Co-Pilot360, its safety suite package, which is being deployed in North America on new passenger cars, SUVs and trucks, works with C-V2X.

Remember: that “C” is cellular.

So as 5G cellular networks roll out, C-V2X will be even more enhanced by the improved network.

According to Butler, Ford will start deploying C-V2X in all of its new U.S. models by 2022.

“We invite other automakers, governments and tech companies to join the significant momentum building for a C-V2X ecosystem,” said Butler.

While that might be a bit of an exaggeration, the more vehicles that are communicating with one another—as well as with, well, everything else—the better off the whole vehicular travel system will be.