When the Dining Room Table Is a Desk

Odds are, you are reading this at home. Even though this is a “business” or “professional” publication, something that you would more ordinarily be reading “at work.” 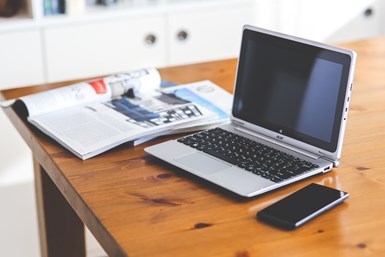 But you probably are “at work,” even though you’re not in a massive office structure or boutique building that doesn’t share an address with where you are right now. “At work” now means “at home.” And until there is a vaccine that will help mitigate the effects of COVID-19 on the population, you’re probably going to continue to be working at home for the next several months.

In early July I had the opportunity to chat with Hau Thai-Tang, Chief Product Development & Purchasing Officer, Ford, about the company’s experience with people working from home (henceforth: “WFH”). He said that they’d discovered that there was actually an increase in overall productivity, which was making people within the organization rethink some aspects of the research and engineering campus design that they’d announced last year.

Maybe companies don’t need as many desks as they once did, given that there were plenty of desks individually purchased from IKEA during the past several months. (Not a good thing for former Ford CEO Jim Hackett’s former employer, Steelcase.)

While there has been plenty of anecdotal information about how well people are WFH (along with stories regarding how many people were dressing nicely from the waist up for purposes of Zoom appearances, with sweatpants and shorts being worn below because “why not?”), there hasn’t been a whole lot of rigorous study of the so-called “new normal.”

The Impact of COVID-19 on the Nature of Work

However, I chanced upon a working paper published by the National Bureau of Economic Research, “Collaborating During Coronavirus: The Impact of COVID-19 on the Nature of Work,” that gives substance to the stories.

The researchers used “aggregated digital meta-data on emails and meetings for 3,143,270 users across 21,478 de-identified firms in 16 large metropolitan areas, aggregated by the provider to the level of Metropolitan Statistical Area (MSA) and day,” and the scope is global.

One of the findings is that “people spent less time in meetings per day (-11.5%) in the post-lockdown period.” Which makes one wonder more than slightly about the value-add of the traditional business meetings that have long been a bane of many of the participants and a dubious benefit to the organization.

Isn’t it conceivable that when people are sitting in their dining rooms trying to get something done they’re going to be more likely to get in touch with the people who they need to execute rather than those who are PowerPoint time-suck mavens?

This seems to correlate with another finding: “significant increases in the average number of emails sent and received among people from the same organization,” +5.2%.

Of course, who doesn’t remember the whole idea of the “water-cooler effect,” which argued that people having more-or-less chance encounters during the workday lead to enhanced creativity? Personal interaction was thought to be absolutely essential, and somehow interacting with the Amazon delivery person isn’t quite the same as spit balling about a movie seen over the weekend or a football game attended. (Remember those things?)

Still, when you have to make do with what you’ve got, the increases in email are a good sign that there is still a level of engagement, albeit one that is not nearly as expressive as something as subtle as a stifled yawn or eyeroll. Somehow a GIF or emoji just doesn’t have the same effect.

People WFH are working longer than they would were they sitting in their offices.

And here’s the finding that undoubtedly makes more than a few executives smile: “Using the span of time defined by the first and last email sent or meeting attended in a 24-hour period, we also find the average workday span increased by +48.5 minutes.” That’s right: people WFH are working longer than they would were they sitting in their offices.

What I find to be somewhat frightening to consider is that many of the people I know who work in the industry had insanely long days pre-COVID. And the notion that they’re working even longer is something that is hard to comprehend. But I understand it. And you probably do, too, as you’re living this, as well.

There are some apologists for this additional working who argue that because people aren’t commuting, they’re saving what is probably greater than an average +48.5 minutes and therefore it is actually a net gain for the employees by WFH.

I suspect there is more than a small number of you who would look forward to sitting in an indeterminable traffic jam on the way to work as at least a change of pace from what you’ve been experiencing since March.

At some point, this ends. But even then, there are going to be transformational reverberations for years to come on the sociocultural level as we adjust what we do and how we do it in the light of what the world went through because of the pandemic.

Even if it means that we all return to wearing socks.