In these cases, the car manufacturers are pretty much out of the picture.

At least that’s how it used to be.

Realize that GM is operating Maven, which is a car-sharing service based on GM cars.

And Ford runs Chariot in San Francisco, which uses Transits to transport people around town.

This week Audi announced that it is offering “Audi on demand” at the Munich Airport, which is its first German site for the service. 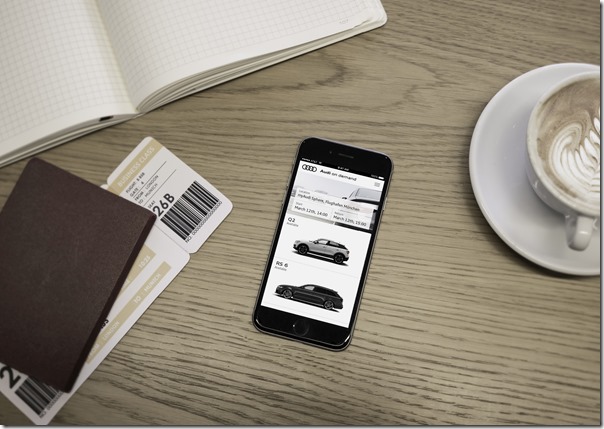 Audi describes it as follows:

“Sophisticated travelers and Audi aficionados can expect to find a fleet of cars equipped with exclusive features – from designer coupes to the high performance experience. Users can book the Audi models with a mobile app and pick them up directly at the myAudi Sphere at the terminal.”

myAudi Sphere is something of a sales facility that Audi opened at MUC earlier this year.

The car service at the airport allows cars to be hired for an hourly rate, with a one-hour minimum.

Audi on demand actually had its start last year in San Francisco and the company says that “90 percent of Audi on demand users in the United States say the service exceeds their expectations.”

Audi also has other car-access services, including Audi select, Audi at home, and Audi shared fleet.

An argument has it that if a person gets into a car that she doesn’t own and finds it immensely appealing, this can lead to a purchase. Want to know why dealers are often anxious to get people to test drive cars? That’s one reason.

But I wonder: As people have access to really fine cars when they need them without the monthly payment, the need to take it in for service, insurance payments, scraping the ice off the windows on a winter morning. . . isn’t there the possibility that the overall number of vehicles that car manufacturers will sell—especially at the higher end, where disposable income is in greater availability—will be diminished?

*Crossovers, light-duty pickups and SUVs are included in this term. It would otherwise be rather unwieldy. “Vehicle” would work, too.