Sure, they’re not as trendy as an EV sports SUV, but they can make a big difference in terms of addressing air quality.
#Volvo

Although there are an increasing number of light-duty electric vehicles on the road—and a whole lot more vehicles to be put on offer in the not-too-distant future—one place where EVs may make significant traction is in the commercial space.

Let’s face it: Consumers drive deterministically. Yes, there are defined routes to work and to the grocery store and to pick up the kids. But there are also unexpected trips that could require more miles than happen to be available via the state of charge of the battery.

And that could be a serious problem.

On the other hand, commercial carriers know precisely where they are going. In fact, telematics has been the norm for Class 8 trucks for quite some time, not as novel as in passenger vehicles.

The nature of commercial trucking is that it is precisely known where a truck is going after it has left the freight terminal. Things can be planned and more carefully managed that the random rides that most of us take at some point.

One of the developers of electric big rigs is Volvo Trucks North America, which has Volvo VNR Electric project trucks. 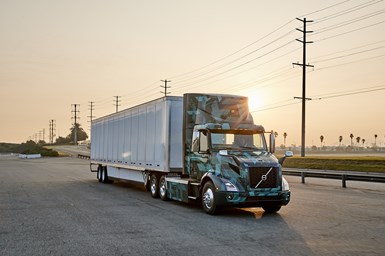 The vehicle manufacturer has developed a project named “Volvo Low Impact Green Heavy Transport Solutions” (LIGHTS), which has the involvement of 15 public and private partners.

Not surprisingly, California is taking a lead in the project. The South Coast Air Quality Management District (South Coast AQMD) received an award of $44.8-million from the California Air Resources Board (CARB), which got the thing rolling. Volvo Group contributed $36.7 million for the project. So there is real money involved.

According to CARB chair Mary D. Nichols, "This forward-thinking coalition has developed both a zero-emission truck and the whole eco-system that supports these state-of-the-art vehicles, from charging to maintenance and repair. This is what it takes to transform this critical freight-hauling sector,

“This project will put more ultra-clean, zero-emission trucks on the roads and highways of communities like Fontana and Ontario that are heavily burdened with growing diesel truck traffic. Volvo Trucks’ vision is helping to clean the air in the communities that need it most.”

According to the Federal Highway Administration, California has 394,383 lane miles of roads in the state, making it second only to Texas (with 679,917 miles). It also has the largest population—about 40-million people (with Texas being second, at about 28-million)—so there are a lot of goods necessary in the state, a good amount of which are shipped by truck. How to refuel an electric Class 8: use electricity. Truck stops everywhere will have a whole new smell: ozone, not diesel.

The LIGHTS project was initiated late in 2018 and it was recently announced that Volvo VNR Electric trucks will go into real-world commercial operation with two California freight companies, Dependable Supply Chain Services and NFI.

As these trucks are working, Volvo engineers and other personnel will be monitoring performance, as well as the driving cycles, load capacity, uptime, range, and other parameters.

Getting Ready for Production

Then that information will be used for the serial production of the Volvo VNR Electric later this year.

As Peter Voorhoeve, president of Volvo Trucks North America, puts it. “This project is unique in the sense of its scope, and that it takes into account the entire system from charging stations to yard haulers to solar panels to workforce development to heavy-duty trucks. We are putting trucks on the road and fully testing them in real-world commercial applications, proving out this innovative approach to learn and prepare for commercial operations for zero-emission freight hauling.”

It may not be as eye-catching as a Mach-E or a Model Y, but the commercial truck has a whole lot more impact.