Why the Chevy Bison ZR2 Is Really Rugged

Although you may not spend a whole lot of time thinking about steel, those who do know that there is a class of materials that are called “advanced high-strength steels” (AHSS) which make mere high-strength steels seem, well, not as strong. As you can see on this chart from WorldAutoSteel, the high-strength is around 800 MPa and the advanced materials are much stronger.

One type of AHSS is boron steel. Boron is added to the material because it increases strength. Which results in all manner of things like toughness and wear-resistance without providing a huge weight penalty.

This minor course in metallurgy comes up because Chevrolet has announced the 2019 Colorado ZR2 Bison which happens to have five skid plates on the bottom of the truck covering the engine oil pan, fuel tank, transfer case, and front and rear locking differentials that are hot-stamped boron steel components designed by American Expedition Vehicles (the material is so tough that in order to form it it must be softened up through heating before being stamped in the die). Meaning that the ZR2 Bison is setup such that it can go bashing around in rocky areas without undue concern that there will be a puddle of fluid coming out of the underside. 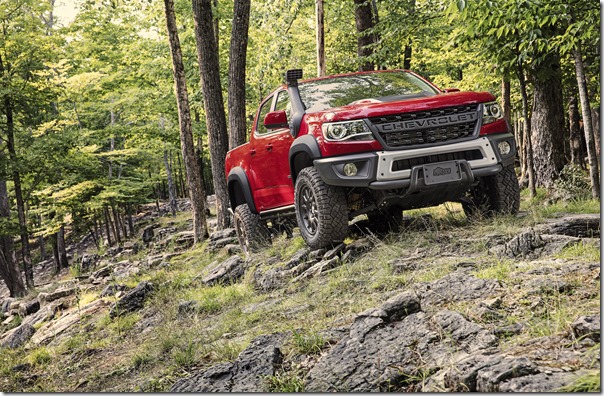 Visually, note how the grille has “CHEVROLET” stamped out of it rather than a bowtie. There are various decals and logos indicating the trim package, as well as the participation of American Expedition Vehicles (AEV).

One interesting aspect of AEV with the Chevy truck engineers is that although it might seem as though the Bison is nothing more than a Colorado ZR2 that has been treated to an aftermarket makeover, the teams worked together such that when the Bison ZR2 comes on the market in January 2019 it will do so with a full factory limited warranty.

Which is probably important for those who are going to use the truck as intended.

As is the boron steel.