Racing has long served as a proving ground to test new technologies before they catch on in passenger vehicles. A few noteworthy examples that have made the transition include turbochargers, all-wheel drive, direct-shift gearboxes, dual-overhead camshafts, push button ignitions, disc brakes and even rearview mirrors (the winner of the inaugural Indy 500 jerry-rigged a piece of glass to the dashboard).

It’s a true trial by fire process. Components are subjected to severe operating conditions. Adjustments are made on the fly, and the best technologies tend to win out. For those that survive and thrive on the track, carpooling in the slow lane should be a breeze. Right?

Not necessarily. In some ways, stop-and-go commutes can be even more demanding than all-out, pedal-to-the-metal conditions. This is especially true for engine systems, notes Mike Bunce, who is the head of research for Mahle’s Powertrain unit. Whereas racecar engines primarily operate at a high fixed speed and load, he points out, their street counterparts must be ready for anything. 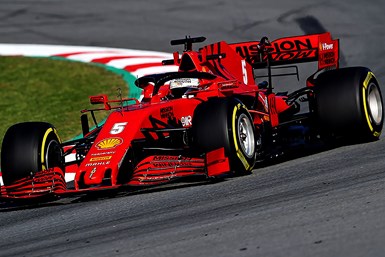 “Modern passenger car engines have to cover a lot of different conditions. From low to high loads and varying speeds; they must heat up quickly to spark catalysts (to treat emissions). Compromises have to be made. It’s a huge challenge,” Bunce says.

The supplier ran into such issues with its Mahle Jet Ignition (MJI) engine system, which promises significant thermal efficiency improvements, lower engine-out emissions and as much as 25% better fuel economy. Ferrari has been using the technology in Formula One racing since 2015. Several other F1 teams, as well as those in other race circuits, also have used MJI.

Based on this success, Mahle has been working to adapt the technology to passenger cars. The company has made a lot of progress in recent years and now is closing in on production applications, according to Bunce, who has headed the program since joining Mahle in 2012 after starting his career at Oakridge National Laboratory.

What is Jet Ignition?

Mahle began developing MJI in 2010. But the basic concept, which uses a pre-chamber to inject a small amount of fuel into the main chamber to enhance combustion, has been around for decades. Honda briefly offered its own version in the 1970s. 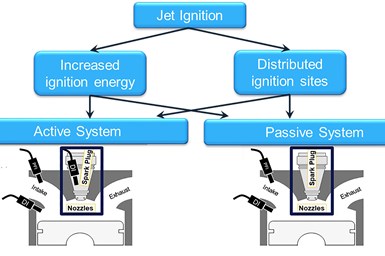 Mahle is developing passive and active versions of MJI.

MJI is said to be more refined and simplified. Two versions are being developed: active and passive systems. Ferrari uses the latter approach due to F1 regulations that limit cars to one fuel injector.

In the passive system, up to about 5% of the fuel injected into the main chamber is transferred to the much smaller pre-chamber (about the size of a thimble) through tiny nozzles during the compression stroke. A spark plug positioned in the pre-chamber assembly ignites the fuel. The resulting high-pressure, partially combusted mixture then is shot back into the main chamber to ignite the rest of the fuel. The jet-like stream and accelerated rate at which this happens is where the name comes from, Bunce explains.

The passive system can improve the engine’s thermal efficiency by up to 10% and significantly reduces particulate emissions, according to the supplier. Bunce says there also are potential cost benefits because MJI would enable the use of port fuel injection in place of pricier direct injection systems, without sacrificing performance.

Active MJI adds a separate direct injection unit to the pre-chamber, providing it with its own fuel source. As with the passive system, the fuel-burned pre-chamber mix jets through nozzles to ignite the main chamber. 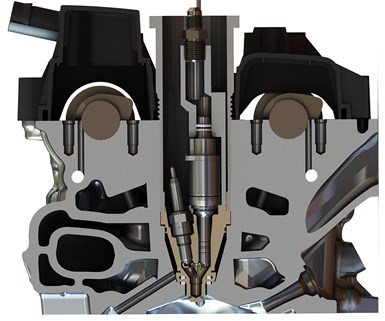 The active setup allows the two chambers to have different air-to-fuel ratios. While the pre-chamber is near stoichiometric, an ultra-lean mix—with twice the air of a conventional engine—could be used in the main chamber. Thermal efficiency is increased by 15%-25%--thanks to reduced pumping, heat, combustion and mechanical losses—which can yield a corresponding boost in fuel efficiency. The process also allows for higher compression ratios that further improves fuel efficiency.

Under such lean conditions, engine-out nitrogen oxide emissions are cut by as much as 98%. Carbon monoxide can be reduced even more, while particulates and hydrocarbon emissions are about the same as with a conventional engine.

The biggest challenge in adapting MJI for passenger cars, Bunce says, has been optimizing performance across a wide range of parameters and variables. This includes changing engine and vehicle temperatures, operating conditions and emissions profiles.

Mahle says it’s in advanced talks with several carmakers about potential production applications for both systems. 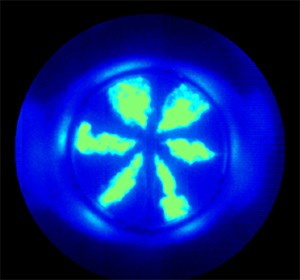 Partially combusted fuel is jetted through nozzles from the sub-chamber to the main chamber. (Image: Mahle)

Passive MJI is expected to launch first, which Bunce envisions happening as soon as two to three years. Without having its own injector, he says, the assembly is fairly straightforward and can be added to an existing powertrain architecture without much modification.

The active system will take more doing. Adding an integrated injector and ancillary support will require a larger assembly package. This makes it almost impossible to squeeze it into a current model without a major redesign. As a result, Bunce says it will likely be three to five years before active MJI debuts.

Both variants likely will be paired with a turbocharger—to boost performance and fuel efficiency—as is the trend with conventional gasoline engines. A turbo also will benefit the operation of the active system, which Bunce says requires more air flow.

The technology can be used in virtually any type of powertrain. In addition to passenger car systems, the company is developing MJI for heavy-duty trucks (gasoline, natural gas or diesel) and small stationary engines.

While the initial focus has been on non-electrified applications, last summer Mahle announced that it’s developing a modular plug-in hybrid system that will team a 2- or 3-cylinder turbocharged engine with passive MJI. Mahle claims the design is lighter, smaller and less expensive than current hybrid architectures.