The rumor is that General Motors is going to bring back the Hummer. But rather than an imposing vehicle with a 6.2-liter V8 under its hood, it will have an electric motor. And this Hummer will be available through the GMC channel, the truck-SUV-only division of General Motors.

The additional word is that it is going to be announced in a commercial to be aired during the Super Bowl on February 3 with LeBron James.

The previous Hummer was associated with the Terminator. This one—assuming that there is one—King James.

This week GMC actually unveiled the 2021 Yukon, a full-size SUV. The Yukon has always been big. This one is bigger.

That is, consider these figures: 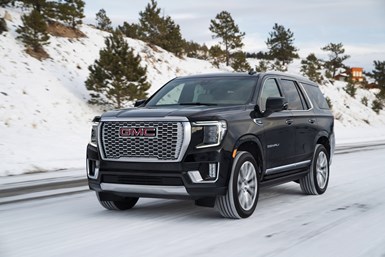 Also this week GMC announced that it will be offering its AT4 trim level—which makes the vehicle more off-road oriented with such things as suspension mods, new mechanicals, different tires—to its full line, Sierra, Sierra HD, Acadia, Canyon, Yukon, and Terrain.

Why GMC Is Important to GM

If the electric Hummer happens GMC is going to get a lot of buzz. And it may sell every one it can build (reportedly at the Detroit-Hamtramck Plant).

It would certainly benefit GM’s CAFE (which, however, seems to be becoming less of a concern as the Administration is changing up the rules in some way that is yet to be definitive, but probably less demanding for the OEMs) .

But will be benefit General Motors’ bottom line. . . ?